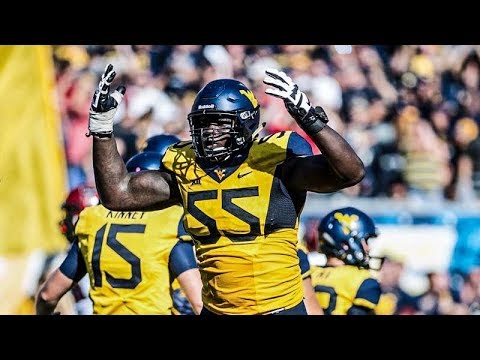 Yodny Cajuste, the 2018-2019 Big 12 Conference Co-Offensive Lineman of the Year, was selected by the New England Patriots!

The 6’5 300 pound monster from Miami, Florida was a three-year starter at tackle for the Mountaineers, having played in 31 career games and starting 30.  Like Will Grier, he did not participate in the bowl game this year in order to prepare for the NFL Draft.

According to NFL.com’s draft analysis, Cajuste is “well-built with physical ability to stay in front of NFL pass rushers if he continues to refine his pass sets and improve his hand usage. Cajuste has the traits and talent but doesn’t play as “bendy” in his lower body as expected, which causes inconsistencies with balance in both the run and pass game. He might end up being more of a positional and stalemate blocker than drive blocker in the run game so he will need to shine in pass pro, which will take work. He has starting tackle talent with the body type for consideration inside.”