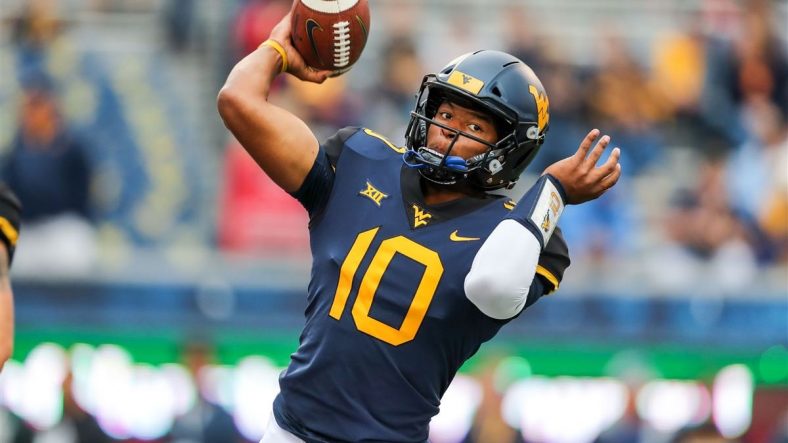 Woodrow (Trey) Lowe III, the Redshirt Freshman out of Bolivar, Tennessee, appears to be the odd man out of West Virginia’s starting quarterback race so far this offseason.  Juniors Austin Kendall and Jack Allison were the featured signal-callers during the Spring Gold Blue Game in April and it felt like an early audition for the starting job between the two.  Of course neither Kendall or Allison did anything to distinguish themselves as the clear starter and Trey Lowe looked like the most effective quarterback during his limited time.  Lowe finished 6-11 with 96 years and this beautiful touchdown throw to Dillon Spalding as time expired:

Of Lowe’s performance, coach Neal Brown said, “”Trey Lowe had some nice runs.  I think if we were actually tackling the quarterback, he may have even had a couple that had broken off.”  Lowe is clearly the most gifted athletically of the three quarterbacks and can create plays when the pocket breaks down.  He can create something out of nothing.  Neither of the other two quarterbacks can do that as well as Lowe.  In addition, Lowe’s speed and athleticism opens up all sorts of other options for the offense, such as the zone read or option possibilities.

Trey Lowe is big (6’4 210 pounds), he’s a dual threat that can create nightmares for opposing defenses and he’s an extremely hard worker.  Lowe trains at “QB Country Memphis” a Quarterback Training & Development Center in Memphis, Tennessee during the offseason.  The lead trainer at this facility recently said, “Trey has as much upside as anyone I’ve trained. Big, strong, athletic and accurate.”

WVU QB @treylowe10 has never looked better, and he’s in baseball season.
Kid is dialed in! Just wants to work and get better. Go get em 10! pic.twitter.com/RknTesf0ri

It’s nearly impossible for a Redshirt Freshman to win the job over a 4 star Junior that has been on the team for a year (Allison) and the very quarterback that the Head Coach went out and recruited to come in and start (Kendall), but if Lowe is the best player, if he gives WVU the best to win this season, he should be given an opportunity to play right now.

It could be argued that Lowe lacks game experience, but the same can also be said for Austin Kendall and Jack Allison, who have played  very sparingly during their careers.  It would be a brave, bold move for Neal Brown to sit two 4 star Juniors for the Redshirt Freshman who was once only a 3 star prospect out of high school.  However, ratings out of high school don’t matter at this point for Kendall, Allison or Lowe.  Trey Lowe might be the best quarterback on the team right now and if he is then hopefully Neal Brown will make the difficult, gutsy decision to start him this season.