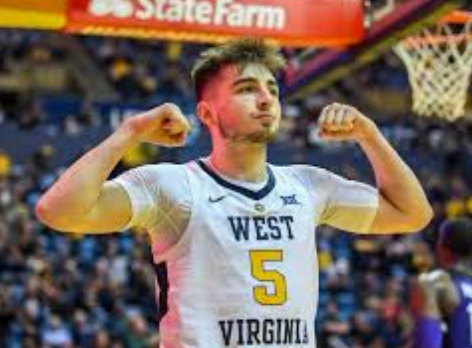 Jordan McCabe is going to be a real treat for Mountaineer fans to watch and cheer for over the next 3 years.  McCabe, the 6’0 boy wonder  who turned into a full grown man during his Freshman season in the Big 12, went through the usual first-year struggles in college.

The game initially seemed to be too fast, too big, too athletic, too everything for him at the beginning of last season.  He was a fish out of water.  A game that came so easy to him his entire life was suddenly challenging and frustrating.  He made boneheaded mistakes and forced difficult passes and spent most minutes of most games sitting on the bench.  He was bad and the team was even worse.

February 26, 2019.  A tough TCU came to the Coliseum and McCabe seemingly just had enough losing. He put up 25 points, had 11 assists, 6 steals in a triple overtime 104-96 upset win over the Horned Frogs.  This is the night that Jordan McCabe showed who he could really be, who we all knew that he would one day become, the leader of the West Virginia Mountaineers basketball team.  The stats were great, but it was the leadership and confidence he showed on the court and in the huddle that really mattered.  Bob Huggins finally had his leader, his coach on the court.

A severely-depleted WVU team went 2-2 to close out the season and 2-1 in the Big 12 Tournament, beating Iowa State, Oklahoma and eventual National Championship-bound Texas Tech along the way.  McCabe averaged 13.5 points, 5 assists and 1.8 steals per game while shooting 35% from three point range during the last 10 games of his Freshman season.

With Oscar Tshiebwe, Sean McNeil, Tajzmel Sherman and Miles McBride joining an already cohesive team, this is a West Virginia team that is capable of competing with and beating anyone in the Big 12 and around the country this season.

Jordan McCabe is a player that we’ll one day look back on and remember as one of the best leaders and winners that ever played for West Virginia basketball, and we still have three more years to enjoy him.  When WVU’s season officially begins, McCabe, still recovering from a torn meniscus, will be the unquestioned, undisputed leader of the team.  Bob Huggins’ team runs through McCabe and will live and die with the ball in his hands.