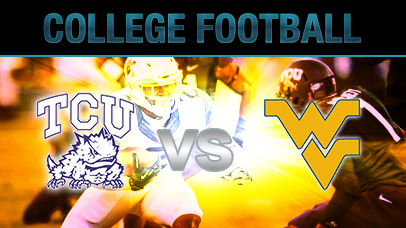 College Gameday is in Fort Worth for a showdown between the West Virginia Mountaineers and TCU Horned Frogs. Both teams come into the game undefeated in conference play. The Mountaineers lost a tough one in their opener to the Virginia Tech Hokies, but this will easily be their toughest challenge since. TCU has cracked the top ten since going to Stillwater and easily dispatching of the Oklahoma State Cowboys. After both teams just went through a bye week this game will reveal a lot about whether these teams are for real or not.

At this point it’s hard to dispute Oklahoma is the best team in the Big 12 after their big season opening win at Columbus over the Buckeyes. Whoever wins today in Fort Worth will go a long way toward establishing themselves as the top threat to the Sooners.

Here is all of the information you need for today’s game:

The Mountaineers will take the field in these uniforms today:

If you are wondering who Lee Corso likes today, here you go.

The good news is Lee Corso is wrong a whole lot.

WVU Lands Hoops Recruit
Mountaineers Ripped Off At Fort Worth