WVU vs NC State Game Info – How to Watch/Stream, Odds and More 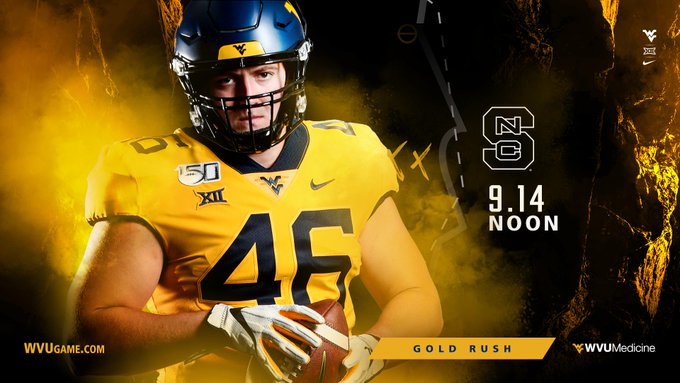 On Saturday WVU vs NC State is set to go down at high noon at Mountaineer Field. WVU comes in at 1-1 while the Wolfpack currently sit at 2-0. The temperature at kickoff is set to be around 74 degrees with about a 50% chance of rain. Perfect weather for the Mountaineers to bounce back and get into the win column. It’s a Gold Rush so the fans should be fired up to cheer on their home team.

Less than 2️⃣4️⃣ hours to Gold Rush 2019! All fans are encouraged to wear gold and grab a gold shaker as you enter the stadium Saturday.#TrustTheClimb | #HailWV pic.twitter.com/PDHt0I4TKy

WVU is coming off an awful loss against Missouri. Mountaineer fans don’t need to hear much about the loss. Missouri had their way with West Virginia on both sides of the ball. The only thing that game film provides for the Mountaineers is it gives many great examples of what NOT to do on the football field.

NC State has welcomed two in-state schools to Raleigh for their first two games, crushing both of them. The Wolfpack took down East Carolina in the opener, 34 to 6 and then Western Carolina in their second game, 41 to 0. What do these two teams tell you about NC State? Not a whole lot, other than they take care of lesser teams.

How to Watch WVU vs NC State

The game will be televised by FS1. Kickoff is set for noon.

For the streamers out there you can watch it on any streaming service that offers FS1.

If you are unable to access FS1, then another option is to listing to the radio stream at WVUsports.com.

The Vegas oddsmakers set West Virginia as 6.5 point underdogs. The total is set at 45.5.

If you don’t have access to FS1, then you need to either figure something out or resort to some shady tactics in order to watch the game.

It’s time to get West Virginia back on the winning track!