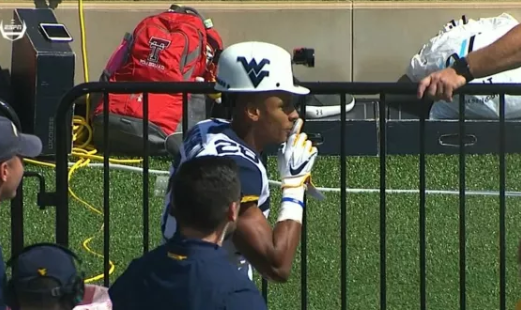 Two games into the season, Tony Gibson’s defense was having trouble forcing turnovers. The Mountaineer defense had only forced one turnover through the first two games.

Gibson was looking for a way to remedy the situation. It just so happened to be a very unconventional remedy: a miner’s helmet.

That’s right. A miner’s helmet with the WVU logo on the side of it would be used to reward anyone that creates a turnover during the game. West Virginia put their own very unique twist on the craze that is sweeping college football.

“It’s a real miner’s hat. I know there were some concerns about that, they said it looked like I bought it from Walmart but it’s a real one. The light works, so that’s the real deal,” Coach Gibson said.

Gibson approached the senior leaders of the defense and asked them if it was a good idea. To incentivize creating turnovers even more, anyone who creates a turnover is able to sign the helmet after doing so.

It wasn’t hard to convince the players this was a good idea. They were on board immediately.

The helmet made its debut against Kansas State. The West Virginia defense came up with a turnover in that game.

Then in the next game there would be even more miner’s helmet fun. Against Texas Tech the West Virginia defense created three turnovers and a pick six. This was when the helmet made its public debut.

After picking off his first of two passes, Mountaineer defensive back Kenny Robinson was shown on the sideline showing off the white miner’s helmet. When Robinson made his first turnover he had to be reminded to put the helmet on. The second time there was no need to remind him. He knew right where to go after making the second interception.

When Keith Washington made the pick six that sealed the game he put on his miner’s helmet.

There’s no official name for it yet, though it’s been called the “turnover hat” or “turnover helmet,” but one thing is for sure: it’s not going anywhere

“We weren’t getting any turnovers so we finally broke it out against Kansas State and now we have four since then,” the WVU defensive coordinator said. “We’ll keep it.”