WVU to take on Texas Tonight 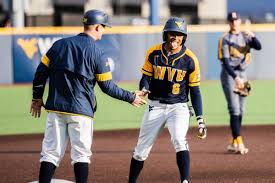 The West Virginia Mountaineer baseball team ran into a hot-hitting Oklahoma State team in the double-elimination baseball tournament being played in Oklahoma City.  The Cowboys busted out in their first at-bat with 5 runs in the bottom of the first inning, knocking out WVU’s starting pitcher after only recording one out.

The bottom of the second was almost as bad as the Cowboys added three more runs to their total to take an 8-0 lead.  The Mountaineers managed to score two runs on a home run by Alex Burns in the top of the 4th.  However, those would be the last runs they managed as the game was called after 7 innings due to the 10 run rule when OSU scored 2 runs to win 12-2.

That means the Mountaineers will play again tonight against the top-seeded Texas Longhorns.  The mercy rule, which ended the game two innings early could only help WVU in the next game as it probably saved them having to pitch another pitcher in the OSU game.  Against Texas, WVU will need to be as fresh as possible and might need all the pitching they can get.

The loser of tonight’s game between Texas and West Virginia ends the tournament for that team.  Texas will make the NCAA Tournament no matter the result of the game, but WVU needs to keep winning and win the Big 12 Tournament to make the NCAA Tournament.  This could be the last game of the season for WVU, so tune in and root the Mountaineers on as they try to beat the Longhorns for the second time in three days.  The game should start shortly after 9:00 Mountaineer time.