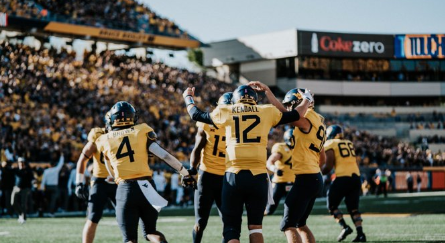 West Virginia’s opening drive was a brilliant clinic on using the short passing game in lieu of run plays and was topped with a perfect Austin Kendall pass to Freshman wide receiver Sam James for the touchdown.  Kendall has struggled to complete the long pass early in the season but that particular pass was right where it needed to be for Sam James to go get it.

Kendall’s very next pass, however, was a terrible interception that led to a Texas touchdown pass from Sam Ehlinger to 6’6 Freshman Wide Receiver Malcolm Epps.  Epps is listed as 6’6 but looked 7’0 against Nick Fortune.  Kendall’s errant pass was a huge momentum-changer as the Mountaineers were up 7-0 and had the ball and a home crowd in a fever pitch.

Brown continued to use screen passes and short passes for most of the first quarter before finally mixing in a few run plays to Kennedy McCoy.  I would’ve liked to see more reverses to speedy wide receivers Tevin Bush and Winston Wright.  Otherwise, the play-calling was very solid (outside of the run play on 3rd and 9 in the 2nd quarter and the ultra-conservative calls right before the half), but I think we gave away a few possessions in the 1st quarter.

In the 2nd half, Texas will attempt to use the running game to wear out a West Virginia defense that doesn’t have tremendous depth.  The constant pounding from the Longhorns’ running game will likely open up plays over the top to their wide receivers and tight ends.

The Mountaineers should continue to use short passes, screens, zone reads and draw plays but also mix in some jet sweeps and reverses to keep the Texas defense on their heels.  Ultimately, this game will come down to which team comes up with a big turnover or two to separate from the other team.