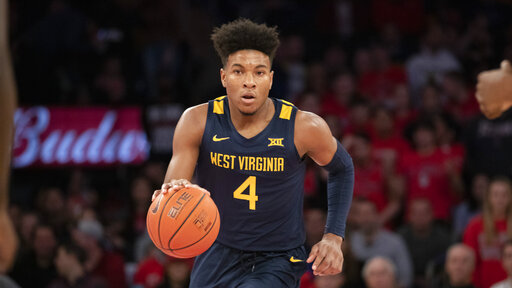 West Virginia came into Sunday’s showdown against Ohio State with an 11-1 record and No. 22 ranking in the AP Poll. Despite this, Bob Huggins’ team had yet to get a win over a ranked team.

WVU ventured into the Buckeye State and took down No. 2 Ohio State by a final score of 67-59.

Freshman guard Miles McBride led the way for West Virginia with 21 points off the bench, including 3-of-4 from three-point land. The Mountaineers were able to get the win despite the three top WVU bigs battling foul trouble all game long. Despite limited minutes, Derek Culver was able to get 7 points and 10 rebounds. Oscar Tshiebwe was held scoreless due in large part to foul trouble. The only other Mountaineer in double figures was reserve guard Chase Harler, who had ten points and a couple of big three-pointers.

Miles McBride. You should have bought stock a long time ago.

Kaleb Wesson led the Buckeyes with 17 points and nine boards.

Ohio State took a 37-31 lead into the half. West Virginia took its first lead of the second half when a Miles McBride jumper put them ahead 41-40 with 13:20 to go in the game.

The Buckeyes took the lead 54-53 on an Andre Wesson three-pointer with 4:43 to go. From there West Virginia closed the game on a 14-5 run, winning the game 67-59. Despite poor free throw shooting throughout the game by the Mountaineers, McCabe and McBride combined to go 6-of-6 in the final minute of the game to seal the win.

The Mountaineers go to Cleveland Classic and defeat No. 2 Ohio State, 67-59!#HailWV pic.twitter.com/s1Oo5dEstS

On Saturday the Mountaineers travel to Lawrence to take on the Kansas Jayhawks in what could be a battle of top ten teams.

It’s a great day to be a Mountaineer, wherever you may be!