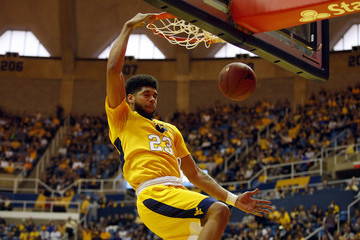 Despite the Mountaineers current win streak there are still some inefficiencies in the half-court set. The return of Esa Ahmad would ease these concerns.

Despite being able to practice with the team and even make the trip to Germany, the return for Ahmad is still entirely unclear.

“What are you going to do?” coach Bob Huggins said. “See, stuff like that used to really piss me off. I have learned over the years to control the things you can control. The things you don’t have any control over, why waste your time when you can’t control it anyway?”

There was a school release in September that stated Ahmad “did not meet NCAA eligibility requirements” and was going to miss half of the season. Neither the NCAA nor WVU would say exactly how many games he was going to miss. Huggins said it should be 15 or 16 games, “but I don’t know.”

A spokesman from the athletic department said in September that Ahmad was not suspended for the fall semester. An associate athletic director for governance and compliance stated that he should “expect his eligibility to be reinstated at some point after the spring semester begins.” The spring semester starts on January 8. There are 15 games before January 8. The 16th game is on January 9 against No. 16 Baylor.

The university’s athletic director and governance returned a message from 247 Sports:

The university’s associate athletic director for governance and compliance responded late Wednesday night. Ahmad must go through a “process of reinstatement” with the NCAA. The official declined to detail that course of action since it “could change as we work through it.” The timeline for Ahmad’s return remains the same, and “we continue to expect Esa’s eligibility to be reinstated by mid-January. ”

Despite not being able to play, Huggins has praised Ahmad’s attitude and work ethic during his punishment. Huggins said that time spent around former Mountaineer guard Truck Bryant as well as former forwards Kevin Jones and Nate Adrian was beneficial. The former players have been around and working with the team.

“He saw how hard Nate and K.J. rebound the ball, and he’s been rebounding the ball,” Huggins said.

There are two Big 12 games to open conference play that are on the road that Ahmad will miss for sure. The third conference game is at home against Baylor. So potentially he could miss three or four games of conference play with the best case scenario being that he misses only two.

Coach Huggins has no concern about Ahmad having issues blending back in with the team.

“I think he’ll struggle for a couple games with conditioning, and then he’ll be fine,” Huggins said.

“He knows what he’s doing,” Huggins said. “Esa’s got great hands. I think the strength of his game is though he’s not a great runner or a great jumper, he really knows how to play. That’s what I loved about him when we recruited him. He really knew how to play.

The Mountaineers need a guy who can score and the half-court set. When Ahmad returns he will be a big help in that area.