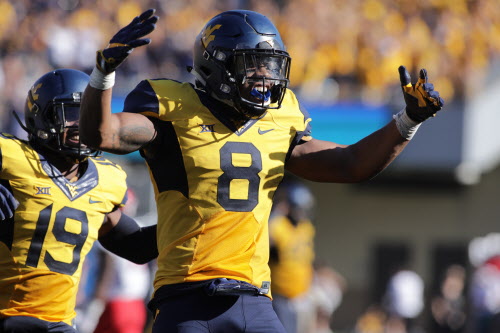 Mountaineer fans know what a great job Kyzir White did stepping in for Karl Joseph the past two seasons. Now attendees of the Reese’s Senior Bowl are seeing what a talent White is.

It’s been an exhibition of White’s skills all week. In this first video he showed great man-to-man cover skills while taking on Penn State tight end Mike Gesicki. This isn’t just any tight end. Gesicki caught 105 passes over the past two years. Who was playing quarterback on the play? None other than Oklahoma superstar Baker Mayfield.

On another play Kyzir was able to bait a quarterback into a bad throw and then pick the ball off. Kyzir undercut the receiver and if this was a live game it would have been a pick six.

WVU S Kyzir White with the INT here. Fantastic read on the QB's eyes and break on the route. pic.twitter.com/UN3yyBHi4K

Then White matched up with Central Michigan tight end Tyler Conklin. He used his great athletic ability to keep up with the tight end and he was able to break the pass up.

It’s been a big week for White. He has elevated his his status from being a safety who was thought of as someone who strictly excels against the run to someone who can excel in stopping the run as well as pass coverage.

Pro Football Focus has handed out some praise to White. They noted that Mountaineer fans are not surprised by the skillset he’s had on display this week.

WVU safety Kyzir White has shown his skillset at the #SeniorBowl so far, which is not surprising to Mountaineer fanshttps://t.co/VXAqLKKQ6f pic.twitter.com/dd8kqc57oj

It’s been suggested by scouts that the Chicago Bears are looking for a safety similar to Kyzir. How exciting would it be for the White brothers to re-unite in Chicago?

When asked about his brother, Kyzir was very confident that his brother will turn the naysayers into believers. This is despite Kevin only playing in five games so far in his three seasons in the NFL.

‘‘I know a lot of people got a lot of bad stuff to say,’’ Kyzir said Tuesday at the Senior Bowl. ‘‘But when he turns it around, you’ll see. They’ll see for sure.’’