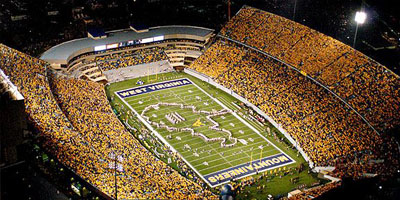 Despite several ranked teams losing, WVU remains unranked in the AP and Coaches Poll. The Mountaineers are 26th in both polls.

Let’s take a look at the ranked teams who suffered losses.

Louisville was pasted at home by the Clemson Tigers. There’s no shame in losing to the powerhouse Tigers, but no one should get blown out at home and expect to be in the rankings. Louisville dropped from 14th to 19th in the AP Top 25 and 14th to 20th in the Coaches Poll. Check out the highlights from the game.

LSU is another ranked team that was pounded at home. In a shocker, Mississippi State rolled into Baton Rouge and pounded the Tigers, 37-7.  This knocked LSU down to 25th in the AP and 23rd in the Coaches. It pushed Mississippi St. into the polls, debuting at 17th and 19th.

Vanderbilt rolled into Manhattan, Kansas and shocked the 18th ranked Kansas State Wildcats. That knocked them out of both polls.

#19 Stanford lost at home to San Diego State in a big-time upset. This pushed San Diego ahead of the Mountaineers and are now ranked #22 in the AP and #25 in the Coaches.

#24 Florida took down #20 Tennesse, 26-20. This knocked Tennessee out of the rankings and bumped Florida up a few spots.

UCLA was in another crazy game. They went down to the Memphis Tigers in a very entertaining game.

Even though WVU remains unranked they are almost undoubtedly a convincing win over Kansas from breaking into both polls.