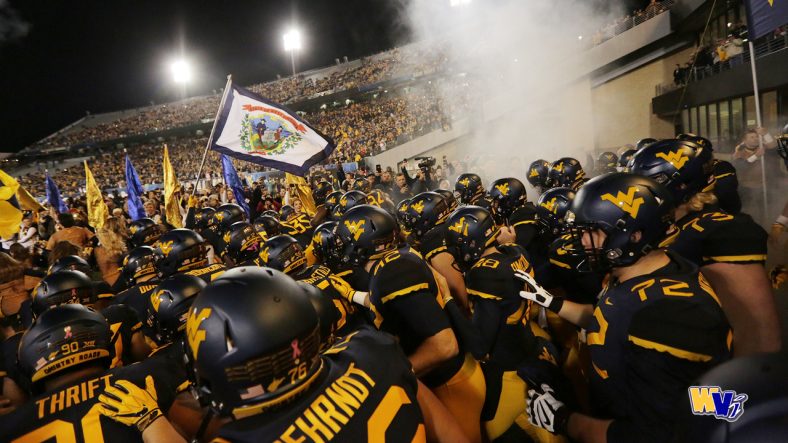 You might be thinking, “How about we beat a team worth a darn before we worry about the College Football Playoff?” You’d have a very good point with that line of thinking. Before we start worrying about particulars, the Mountaineers do have some tough opponents to take down. Obviously, if West Virginia loses any of the remaining games, the playoff bid is over. That said, what fun is that? Let’s go ahead and speculate away.

Let’s make this really simple and identify the teams that will need to lose one more game for West Virginia to pass in the rankings. I’m going to give these teams the benefit of the doubt here. A Mountaineer team with a win at Texas and at home against Oklahoma along with a win in the Big 12 Championship at a neutral site will be hard to deny. Despite this we’re going to give a team like one-loss Ohio State the benefit of the doubt.

Don’t need to add much here. In all honesty, Bama might need to lose twice for West Virginia to pass them in the rankings. Don’t count on that happening. At this point it is probably best to pull for Alabama as they can clean out the SEC with wins over LSU and a win in the SEC Championship game.

Bama has a showdown at Death Valley Saturday. Outside of that there is the Iron Bowl, which will be the season finale in Tuscaloosa. Home games against The Citadel and Mississippi State pose very little threat to the Tide.

It’s hard to imagine Clemson not being in the College Football Playoff. For the sake of simplifying the Mountaineer path to the playoffs, we are going to assume that Clemson and Bama are basically in.

The lone tough game left for the Dabo and the boys is a trip to Boston College November 10. Even in that game Clemson will be big favorites.

This weekend Alabama pays Death Valley a visit. The Tide are two touchdown favorites. In all likelihood, the LSU Tigers national championship hopes end Saturday night at the hands of Nick Saban.

For the 8th-straight season, #LSU and Alabama will meet in @CBSSports' primetime slot. Details: https://t.co/Nuqt2JK7Ni pic.twitter.com/nYZ18fjxRL

If somehow LSU upsets Bama, this creates a very tough scenario for West Virginia to crack the top 4. Bama is probably going to drop to 5 or 6 at the lowest. So this cements LSU in the top 4 (assuming they don’t lose) and creates two teams WVU will be unable to pass instead of just the one (Bama).

Beware of a tricky game at College Station in the regular season finale.

The Irish come in at No. 4 in the first #CFBPlayoff poll of the season. #GoIrish ☘️ #uNDefeated pic.twitter.com/acfZLNMHvp

How good does the season opening win over Michigan look now? An undefeated Notre Dame team is basically locked in to the College Football Playoff.

A Notre Dame lose would be huge in getting West Virginia to the College Football Playoff. They are a massive roadblock. With road wins over Michigan and Va Tech to go with a home win over Stanford, if the Irish win out, they are in. It’s as simple as that.

With that said, a loss is not likely. Notre Dame has a very soft schedule to finish out the season. This Saturday at Northwestern could be tricky for the Irish, though.

Michigan’s lose loss was a home loss to Notre Dame in the opener. Since then Michigan has piled up seven straight wins.

That said, Michigan still has plenty of work to do. Saturday the Wolverines take on Penn State. Michigan closes out the season with a trip to “The Shoe” a place Michigan hasn’t won since 2000. If they make it through there unscathed there is still the Big 10 Championship.

It is a must that either Notre Dame or Michigan lose. If Alabama and Clemson either go undefeated or lose just one game (extremely likely) and these two teams win out, then there is your College Football Playoff. Alabama, Clemson, Notre Dame and Michigan.

Georgia is still very alive in their quest for the College Football Playoff and berth in the SEC Championship game.

This Saturday Georgia takes on Kentucky. The winner of that game all but wraps up the SEC East. It will secure them a game against either Bama or LSU in the SEC Championship.

So if Georgia finishes the season undefeated, fear not, because LSU (who crushed Georgia once already) or Bama will be waiting for them in the SEC Championship game.

No need for any breakdown here. If West Virginia beats Oklahoma, they pass them up.

I can’t vision a scenario where Kentucky ends the season with one loss. But if they somehow do, they are probably finishing ahead of the Mountaineers. It all is going to come crashing down on Kentucky Saturday against Georgia.

Despite their blowout loss to Purdue, Ohio State is ahead of West Virginia. With their remaining schedules, there will likely be an elimination match against Michigan in the season finale.

We omitted Central Florida, Florida and Washington State. With the remaining schedule for the Mountaineers, if they win out there should be no problem passing up these teams in the rankings.

It seems like a lot of teams to pass up. That’s because it is. But most of these teams have some tough games coming up.

Who are we rooting for this weekend?

Kentucky over Georgia. Alabama or LSU would undoubtedly crush Kentucky in the SEC Championship game, so this game would most likely eliminate both of them.

Oklahoma over Texas Tech. Sure, Oklahoma is ahead of West Virginia, but this bolsters the quality of a Mountaineer win over the Sooners.

And last but not least…