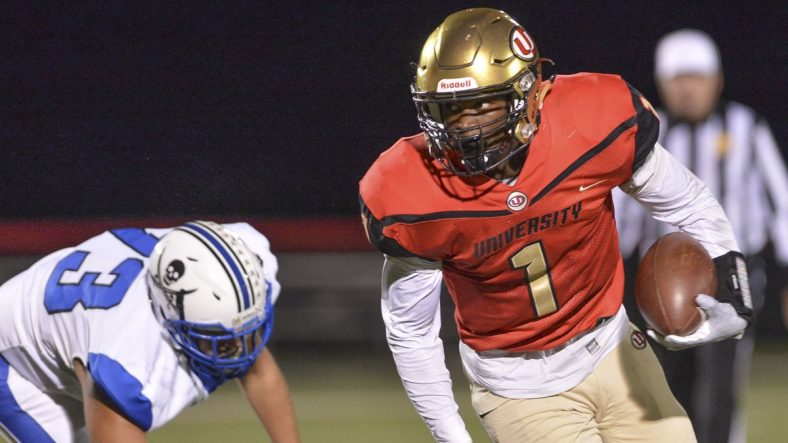 Now he has no choice but to hit the road.

With just two weeks remaining until the early signing period, the Morgantown native saw his scholarship offer pulled. Richardson is the son of former WVU defensive tackle Tony Richardson. He is also one of three in-state players that committed to play for West Virginia in this recruiting class.

Richardson is very strong academically, as he also received offers from Columbia, Dartmouth and Yale.

According to Richardson he was told by Dana Holgorsen that he “wasn’t a Division I talent on defense, and that they had enough receivers.”

Committed to #WVU since July, University High's Amir Richardson decommitted after Dana Holgorsen reportedly told him, “I wasn’t a Division I talent on defense and that they had enough receivers." https://t.co/1OdGsR2UGM pic.twitter.com/o8Ldd7BF2V

Rivals rated Richardson as a three-star prospect. While at University High School he was the teammate of Dana Holgorsen’s son, Logan.

During his senior season Richardson had 45 tackles including five for loss. As a standout receiver he had 29 catches for 527 yards to go along with five scores. On the ground he racked up 336 yards rushing and four scores.

“A workaholic both on and off the field, in the weight room during off-season. A joy to coach,” Kelley said. “Has made countless big-time, spectacular plays. An academic leader at our school. Immaculate behavior.

“He will overcome this and land on his feet and be an excellent college player. No animosity towards West Virginia — we understand it’s a business. Decisions are made and this young man will clear this hurdle and move on to success.”

A conflicting report came from Dub V Nation that Richardson decommitted from WVU, opposed to his scholarship being pulled.

With early signing period 12 days away, West Virginia has just 14 recruits for the 2019 class.