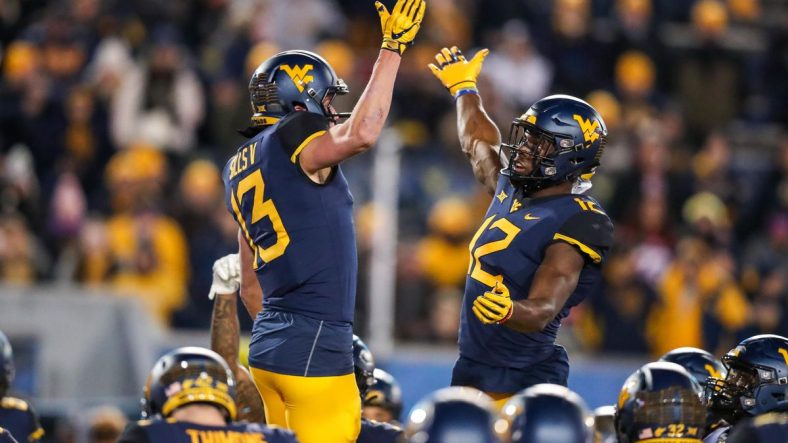 The 2019 NFL Draft opens Thursday night in Nashville. Teams have spent months scouring the nation and studying countless hours of film in hopes of finding the players that will best fit them. As many as six former Mountaineers will be among those players.

But what’s best for a team isn’t necessarily best for the player. Most draft projections focus on what player would best serve a particular team. In this analysis, we’re going to explore the what team would be the optimal outcome for each WVU prospect, not necessarily the other way around.

A redshirt senior who started the past two seasons in WVU, Cajuste might be the most day one ready of the Mountaineers prospects. No team needs a day one starter to step in at tackle more than the Browns.

Yodny Cajuste has started all 1️⃣2️⃣ games at tackle this season en route to being named to the All-Big 12 Second Team! #HailWV pic.twitter.com/29GkRBVxjx

The retirement of future Hall of Famer tackle Joe Thomas before the 2018 season left the Browns with a gaping hole at left tackle, one they filled by starting undrafted rookie free agent Desmond Harrison last year. This is obviously less than ideal for the Browns but more than ideal for Cajuste. Cleveland doesn’t have a first round pick after dealing it to the New York Giants in the Odell Beckam Jr. trade, so if the Browns were to land Cajuste with their second or third round selection, the former Mountaineer could slide into the starting lineup at left tackle from the get go.

The fact that the offense will be built around second-year quarterback Baker Mayfield with similar spread concepts WVU ran would make a smooth transition for Cajuste.

?? Sideline cam of Will Grier silencing the Texas crowd with game winning 2 point conversion + Horns down ??

No other West Virginia prospect has a greater divergent potential draft range than Grier. Sirius NFL Network analyst and former New England Patriots offensive coordinator Charlie Weis believes Grier is the second-best quarterback in this draft. Others, such as ESPN draft analyst Todd McShay, don’t have him as a top 5 QB prospect.

Grier spent five seasons on college campuses and was a starting quarterback for 2 ½ of them. While he isn’t an ideal day one starter (few rookie quarterbacks are), his learning curve likely is less steep than even top prospects like Dwayne Haskins from Ohio State, who has less than 20 career starts.

The Buccaneers offer a unique combination of factors that make it the ideal home for Grier. The Bucs do still have former first overall pick Jameis Winston. But the shine has definitely worn off the former Heisman Trophy winner as he enters his fifth NFL season. Winston, who will play 2019 on the final year of his rookie deal, has been widely inconsistent on the field and a hot mess off of it. The organization still has a desire to see him succeed, but no longer is willing to wait for it.

The team’s last gasp effort to turn Winston into a franchise quarterback was the hiring of Bruce Arians as head coach. Arians’ coaching has led to success for NFL quarterbacks Ben Roethlisberger, Andrew Luck and Carson Palmer. The Bucs hope that magic will translate to Winston, but Arians has no mandate to push Winston if Arians doesn’t think it’s going to work.

If Grier lands in Tampa, he can start the season as Winston’s backup while absorbing the tutelage of Arians’ quarterback wisdom. If the Buccaneers season breaks down similar to recent history, Grier could take over late, gaining valuable experience towards being the Tampa starter in 2020.

As the old saying goes the Eye in the Sky doesn't Lie. This notion that Will Grier's arm strength is lacking for the @NFLDraft is just pure BULL. Perfectly placing a ball 60 yards in the air to a sub 4.4 WR in Full Stride discredits any truth to that BOOM! #HailWV pic.twitter.com/wcYPunNJGh

Having Mike Evans as a number one receiver certainly doesn’t hurt as a quarterback landing spot.

Jennings had plenty of highlights during an extremely productive WVU career, none higher than his game-winning touchdown catch at Texas last season. But Jennings was viewed more as solid than flashy with the Mountaineers, with receiving mate David Sills tallying more touchdown glory.

Gary Jennings with the ? face on his way to a 60-yard TD. Savage. #WVU pic.twitter.com/BDpzUD31JG

The idea of Jennings as merely a possession receiver turned a bit after running a 4.42 40-yard dash at the NFL combine. His combine, coupled with desirable height-weight combo (6-1, 214) made more than a few NFL scouts go back to the WVU game film to get a second look at the two-year starter.

During his WVU career, Jennings showed an ability to seamlessly complement a fellow productive pass catcher. The Los Angeles Chargers made a playoff run last season led by potential future Hall of Fame quarterback Philip Rivers. But an inordinate about of Rivers’ production was linked to Pro Bowl receiver Keenan Allen. Allen had 1,196 yards receiving but no other Charger had more than 700. Jennings strong hands and ability to secure contested balls would complement Allen and give Rivers a solid second or third option.

Long is the Mountaineers only early departure, leaving with a year of eligibility remaining. He probably would have benefited from another season in Morgantown, but his stock is high enough in 2019 that the decision isn’t outrageously misguided.

Long is an ultra-quick pass rusher who’s lateral quickness is an opposing quarterback’s nightmare. His initial step makes him a difficult stop from a tackle’s perspective and closing speed is an asset in finishing the play.

The biggest question mark for Long at the next level is size. At 5-11, 227, Long lacks the length and weight/strength of a prototypical NFL pass rusher. The former WVU linebacker would benefit from a year of special teams duty and an off-season in an NFL weight room.

The Steelers present Long with this best-case scenario. Pittsburgh’s defense relies heavily on pressure created by its outside edge rushers. Currently, the Steelers have former first round picks Bud Dupree and Pro Bowler T.J. Watt handling outside linebacker duties. Watt appears to be a long-term mainstay and potential superstar in Pittsburgh. Dupree, on the other hand, is likely neither. The ex-Kentucky linebacker is on the final year of his rookie contract. While not terrible, Dupree hasn’t lived up to his first round pedigree and it’s likely the Steelers move on from him after this season.

The combination of Dupree being short term, and Watt being long term, is perfect for Long. He could be a special teams contributor as a rookie, while simultaneously learning the Steelers complex defensive scheme and adding bulk to his frame. That would allow him to enter 2020 as a potential starter at OLB.

Sills story is well-known: Offered a scholarship as a quarterback in eighth grade by USC; started his college career at WVU as a quarterback before finishing his freshman campaign as a contributing receiver; transferred to junior college to give the quarterback dream one more shot; returns to WVU to become one of the most prolific receivers in school history. Now the question: What will the next chapter read?

From getting a scholarship offer at 13 to play QB at USC to becoming an All-American WR at @WVUFootball, David Sills (@DS5_) talks his unique journey heading in to the #NFLDraft pic.twitter.com/0H1eKST9OD

Sills has a solid frame (6-3, 211) which he used to abuse Big 12 defensive backs the past two seasons. He was a big-play machine as West Virginia, tallying 33 touchdowns over the past two years. Sills might have been the best jump-ball receiver in the country.

At the next level, Sills will need to improve his ability to win physical battles against bigger and stronger cornerbacks than he faced in college. His high-point ball skills will translate, but receivers don’t make a living in the NFL on jump balls alone.

Sills ideal draft spot is the Green Bay Packers. Going to the Packers, Sills would team with future Hall of Famer Aaron Rodgers. Going from Grier in college to Rodgers in the NFL is a receiver living well.

Rodgers and the Packers have seen an erosion of their receiving corp in the past couple of seasons with the loss of pass catching stalwarts Jordy Nelson and Randall Cobb. The team still has Davante Adams, who had a monster season with 1,386 yards and 13 touchdowns. But Rodgers didn’t get significant production from the rest of the crew.

Green Bay’s 2018  sixth- round pick, Equanimeous St. Brown, tallied 328 yards as a contributing rookie. Sills was infinitely more productive at WVU than St. Brown was at Notre Dame, so Sills could be a factor as a rookie.Llanding in Green Bay is the career debut best suited for the former quarterback phenom.

Wesco came from nowhere before last season to become a fan favorite. After playing just two games before his senior season, the Martinsburg native did the seemingly impossible: making the tight end relevant in Dana Holgersen’s offense. Despite playing in a modern spread system, Wesco’s blocking was part of a two-way tight end skills of a bygone era.

The Patriots are in need of tight end help with the retirement of Rob Gronkowski. No, Wesco is not now, nor will he ever be, Gronk. But, like Gronkowski, Wesco was a bulldozer of a man in the Big 12 and has the strength and desire to become a solid blocker at the professional level.

Today’s #WNSPOTD is @WVUfootball TE Trevon Wesco. Wesco’s stock has been looking up since the Senior Bowl. His ability to line up from multiple positions and be a contributor as both a blocker and receiver makes him a valuable get on day 3.

Going to the Patriots, Wesco’s skills would be putty in the hands of master builder Bill Belichick. Despite having the greatest quarterback in NFL history, the Patriots latest Super Bowl title was off the back of a pounding ground game as much as Brady’s arm. Understanding that Gronkowski didn’t have the ability to separate he once did, Belichick leaned on his future Hall of Fame tight end’s blocking more than receiving skills.

Working in the famed Patriots system, Wesco could build from a special team contributor to a significant member of Brady’s offensive juggernaut.