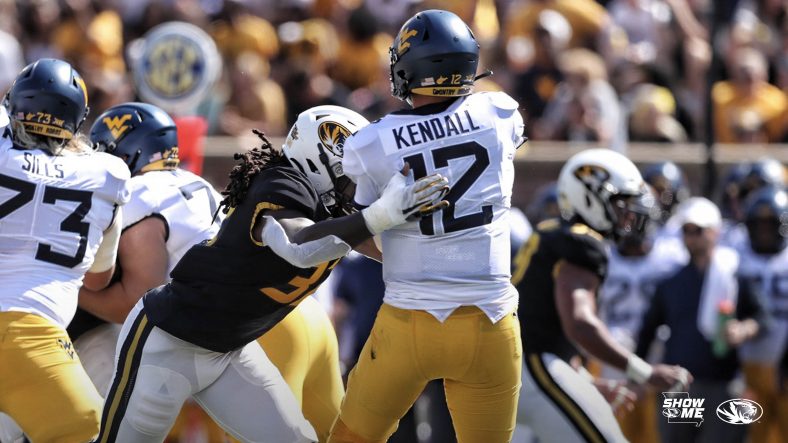 There are a lot of negatives but also some positives from the first half of the Missouri game.  To begin, the onside kick attempt at the start of the game was outstanding.  Although it didn’t work out as planned, it sent a message that said “we’re here to compete and to win.”

After stopping Missouri on their first possession, the Mountaineers were ultra-aggressive to start the game.  Austin Kendall went deep twice and Brown obviously opened up his offensive playbook and was far more aggressive than he was in the season opener against James Madison.

Believe it or not, I think the team looks fundamentally sound, both offensively and defensively.  Coaching is not the problem here.  The problem is the talent (or lack of talent) right now.  This is a young, inexperienced team playing their first road game of the season and it’s showing.

Missouri’s offensive and defensive lines are superior to those of the Mountaineers.  They’re getting bullied and pushed around, and there’s not much that Brown can do about that.  The discrepancy in talent between the two teams has to be frustrating for the Mountaineers’ first year Head Coach.

Outside of one bad throw, which was poorly thrown behind Tevin Bush and resulted in an interception, Austin Kendall has done the very best that he could under the circumstances.  The circumstances, of course, are the constant pressure from the Missouri defensive line and outstanding coverage from the secondary.  The second interception was just a fantastic play by the Missouri linebacker to tip the pass on what would have been a completed first down.

The offensive line continues to look over-matched and the running backs do not look like they are hitting the holes (if there are holes available) aggressively.  It’s a bad start, but it’s not time to panic yet.  WVU may not come back to win this game, but they certainly can make some noise and improve on their first half performance in the second.