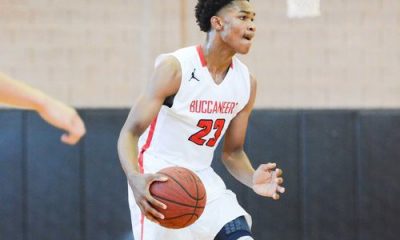 Ft. Lauderdale (Florida) University School shooting guard Trey Doomes has officially committed to the Mountaineers shortly after his visit to Morgantown. Doomes chose the Mountaineers over Auburn, Arkansas, Ole Miss and others.

“The coaching staff has been great to me,” Doomes told EerSports earlier this week on why he chose WVU. “They’ve visited multiple times and I feel confident about the situation and opportunity to be a part of something special.”

WVU assistant Ron Everhart has been hot on the trails of Doomes. That said, the entire staff has been in on the 2018 recruit. Additional to the coaching staff, one of his future teammates has also done his part to make sure Doomes gets to Morgantown.

“I also have a great relationship with my guy Jordan McCabe,” Doomes said.

This makes the third commit for the 2018 Mountaineers recruiting class. According to 247Sports, Doomes is ranked as the No. 41 shooting guard. With this commitment it pulls the Mountaineers to the 20th ranked class in the 247Sports Team Rankings, just a spot behind Kansas.