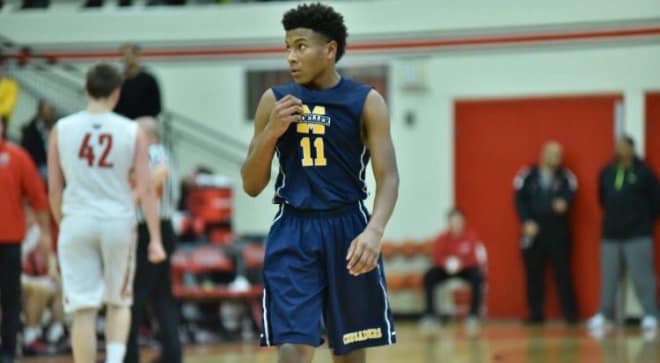 Miles McBride of Cincinnati is the first recruit of the 2019 class. He attends Archbishop Moeller High School. He took to Twitter to announce he is going to be a Mountaineer.

According to 247Sports McBride is the seventh-rated prospect out of Ohio. West Virginia offered the 6-foot-2 combo guard in January. McBride made an unofficial visit to the campus on January 21 during the Texas game. He also received offers from Dayton, Ohio and Toledo, while Butler and Xavier were also interested.

McBride suffered an injury during football season and has been sidelined this entire basketball season. He’s currently walking and rehabbing and is expected to return to the court in March, according to his father, Walt McBride.

“He wants to focus on basketball and getting better,” Walt McBride said. “He is excited about West Virginia.”

Guard Miles McBride knew he had found the right fit at #WVU. So the defensive minded player picked up the phone and committed to a defensive minded coach and now he’s excited for what the future holds. https://t.co/K9fG7CVUli ($)

The state’s top perimeter defender is off the 2019 board. Moeller’s Miles McBride remained a top prospect despite being sidelined all season with an injury. https://t.co/PVdNUWzf1Q