WVU is a Destination Program 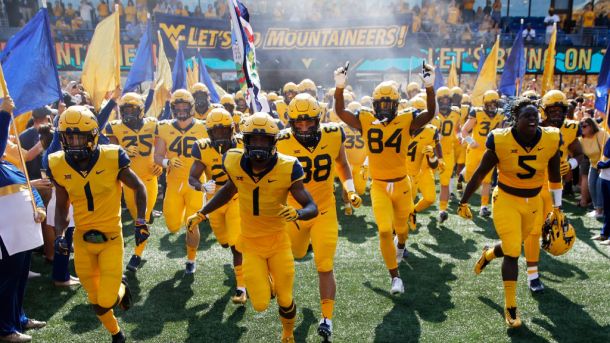 MORGANTOWN, WV – OCTOBER 06: West Virginia Mountaineers take the field before the game against the Kansas Jayhawks at Mountaineer Field on October 6, 2018 in Morgantown, West Virginia. (Photo by Joe Robbins/Getty Images)

There are only 5 Power Five athletic conferences in the NCAA Division I.  Within the Power Five conferences, there are a total of 65 teams.  These 65 teams are could be divided into three groups:  Elite Tier, Mid Tier, Lower Tier.  West Virginia would be somewhere in the Mid Tier of the Power 5 teams, while Michigan or UCLA would be among the Elites.  Rutgers and Oregon State might be classified as Lower Tier Power 5 schools, teams with little to no historical success.

Rich Rodriguez was pushed out by an uncooperative athletic department incapable, or unwilling, to give him what he needed to realize his vision for the future of the program.  Holgorsen took a step down because he simply wanted to be in Houston.  Holgorsen’s move had nothing to do with leaving for a better school with a better chance of winning a National Championship.  Beilein’s move to Michigan was perhaps the most peculiar and unfortunate for West Virginia’s case for being considered a “destination program.”  However, these “Elite Tier” programs are not simply destination jobs, they are dream jobs.

If a coach is offered one of these Elite Dream jobs, it’s nearly impossible to turn down, even if you are coaching at the professional ranks (i.e. Jim Harbaugh, who mutually split with the San Francisco 49ers before taking over at Michigan).  The support, the tradition, the money, etc., is simply too much to turn down.  Beilein, with no real ties to West Virginia, was pursued by an Elite Dream school and had to take it.

Just because some schools are a step up from WVU doesn’t make it less a “destination job.”  There are better jobs in college sports than West Virginia, but there are very, very few in the country that a West Virginia Head Coach would leave for.  90% of college coaches from various divisions would jump at the chance to coach in Morgantown.  Approximately 10% of these coaches might not be interested.  If 90% of the coaches coaching in the United States today want to coach at WVU, it’s officially a “destination job.”

Unfortunately new football head coach Neal Brown falls in the category of coaches that might leave if the right opportunity came about.  The University of Kentucky, where Brown played wide receiver and was the offensive coordinator before landing his first head coaching position at Troy, would certainly be appealing to him if the position were to become available.  Again, however, this does not make West Virginia any less of a destination job.