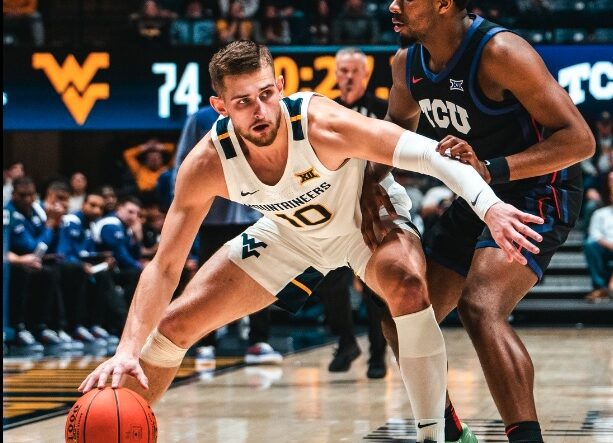 MORGANTOWN, WV—-Cue Country Roads! The West Virginia Mountaineers broke a five game losing streak with a solid big win over No. 14 TCU, 74-65. It was West Virginia’s first conference win of the season and it couldn’t have come at a better time. The victory is no doubt a turning point as Texas comes to Morgantown this Saturday. If WVU can build off this win by taking out Texas, Iit will be huge when the team is considered for post season tournament seeding.

A great scoring start for the Mountaineers propelled the team to a 39-24 lead at the half. WVU guard Erik Stevenson hit a baseline jumper to start the opening surge tying the game at two and capped a 9-0 run that led to a 9-2 lead. Consecutive steals from Kedrian Johnson and Stevenson kept the Mountaineers surging with a 13-3 run to take a 24-10 lead midway through the first half. WVU took a 15 point advantage into halftime. Johnson led all scorers with 10 points and Jimmy Belle Jr. had 10 points and 10 rebounds.

At one point in the second half TCU went on an 8-0 run to cut the WVU lead at 56-47. However the Mountaineers forced a turnover and Matthews had a two handed slam to push the WVU lead back up to eight 60-52 with seven minutes in the game. The Horned Frogs never quit and took advantage of an 8-2 run to get within two with just five minutes to play. However WVU responded with a nice 10-2 run for the 74-65 victory.

The schedule doesn’t get any easier for WVU as No. 7 comes to Morgantown Saturday Jan. 21 for a 6 p.m. contest.