WVU Gets a Huge Win and Everyone is Fired Up About it….Except the Students 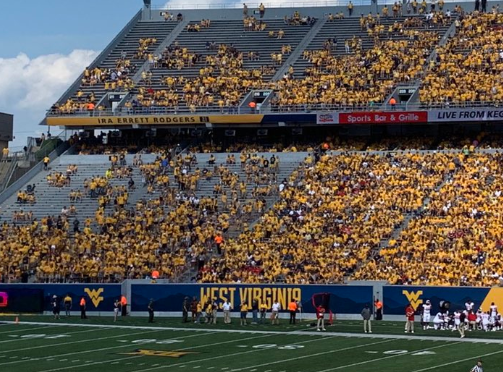 WVU broke through on Saturday and had a huge win Saturday over the previously undefeated North Carolina State Wolfpack. The Mountaineers controlled the game for the most part, pulling away late for a final score of 44-27.

It’s amazing how much one game can change. After the loss to Missouri, everyone had tempered the expectations and braced themselves for the worst. Many people expected a WVU loss today. Instead Neal Brown came out with an incredible game plan that his team executed to perfection. As a result, Morgantown is jacked up about Mountaineer football.

The fan base is now fired up and thinking about what this team can achieve this season. Just days ago there were fans all over Facebook calling each other out to #TrustTheClimb. One big win has Mountaineer fans fired up for Mountaineer football. And rightfully so. It was an incredible performance. Especially when you consider how things went in Missouri.

Well, almost everyone is excited about the team. There is one group that seems pretty indifferent to Mountaineer football:

During the pre-game there was a glimpse of the student section in the background when the FS1 broadcast and it looked very empty. Maybe they were still filing?

Nope. Here’s a photo from the 3rd quarter when West Virginia was leading by a score of 31-27. Showing off the empty WVU student section:

4th quarter of a 4 point game and lots of the student section is nonexistent. @WestVirginiaU sell the seats. pic.twitter.com/qVbLeAzbTU

Just to prove this isn’t a one-off, here is a photo from the home opener:

When you look at the discussion on Twitter, some of the students claim the heat is why they didn’t stick around. When asked why the rest of the stadium stayed packed they responded, “Well that’s because those people paid for their seats.”

It’s not clear what the answer to this is, but something needs to be done. Cut the amount of student tickets in half and sell the remaining tickets. Or give them to underprivileged people. I don’t know the answer. That’s for someone who is paid a lot more than me to decide. What I do know is the WVU students have proven they are incapable or not interested in packing their section and cheering for four quarters.

The next home game is a visit from Texas. A half-filled student section against them is something that simply cannot happen.

Alright, I promise this is my only negative article on a day like today when the Mountaineers had an outstanding win. To repay you, here is a list of some other, more positive stories from today.