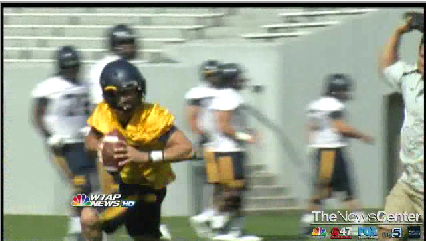 MORGANTOWN, W.Va. – If nothing else, West Virginia fans know who won’t be their team’s starting quarterback Saturday.

Coach Dana Holgorsen released a depth chart Sunday night and put juniors Clint Trickett and Paul Millard as the No. 1 quarterback. One of those two will start against William & Mary, meaning redshirt freshman Ford Childress is the third string.

Another omission highlights the opening day projection. Junior Andrew Buie, the leading rusher from last season, isn’t listed at all. Charles Sims, a transfer from the University of Houston, is first, followed by freshman Wendell Smallwood, junior college transfer Dreamius Smith and junior Dustin Garrison, who led the team in rushing as a freshman in 2011.