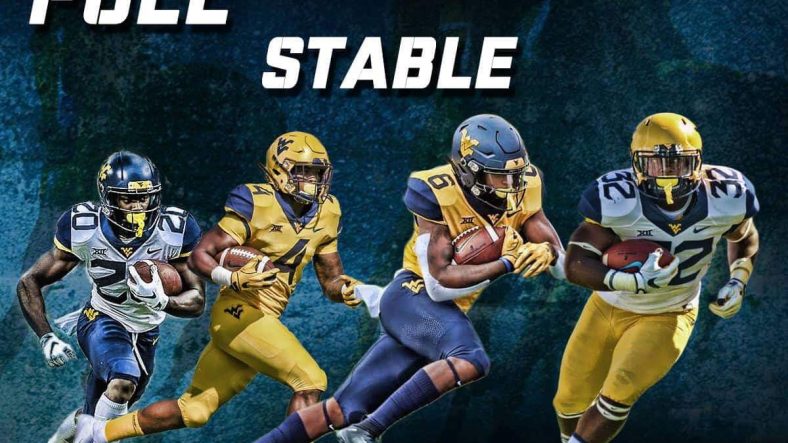 Spring Football Practice started today!  New Head Football Coach Neal Brown will not release a depth chart prior to Spring Practice.  “No depth chart right now, which I know is going to be disappointing to some of you guys, but there is really nothing to base it off of,” Brown said. “When I came here, I told our guys everybody has a clean slate so I have watched very little video.  “I don’t think it’s fair to the guys on the team that have been working for me to release a depth chart on something that I don’t have one practice of evaluation,” he added.  With that said, the following is the running back starter projections of Mountaineer Sports:

Leddie Brown (Sophomore) – Brown, who showed flashes of brilliance last year, rushing for 115 yards against Youngstown State and 107 yards against Kansas, finished the season as the team’s 3rd leading rusher.  Brown had 446 yards and four touchdowns last year and is so talented that he could steal carries from the two more experienced backs.

lec Sinkfield (Sophomore) – Sinkfield, the 5’9 186 pound ultra-talented back from Delray Beach, Florida, was thought to be able to challenge for the starting spot last year before an ankle sprain kept him off the field for four straight games. He finished last year with 19 carries for 68 yards last year.  If he can stay healthy, he will challenge all of the older, more experienced running backs for playing time.

The running backs unit is the most talented, deep position on this year’s WVU football team.  All four running backs will see significant action because they are all too talented to keep off the field.  In addition to the the aforementioned running backs, Tony Mathis, a true Freshman from Cedartown, GA, as well as Lorenzo Dorr and  T.J. Kpan will provide even more depth to an already deep unit.

Chad Scott (Co-Offensive Coordinator/Running Backs Coach) – Scott is reunited with Neal Brown after serving as the tight ends and hybrids coach at North Carolina for the past 3 seasons.  He previously worked with Brown at Kentucky, Texas Tech and Troy.  Coach Scott has inherited an awesome group of running backs and will have plenty of weapons at his disposal as Co-Offensive Coordinator and Running Backs Coach this year.