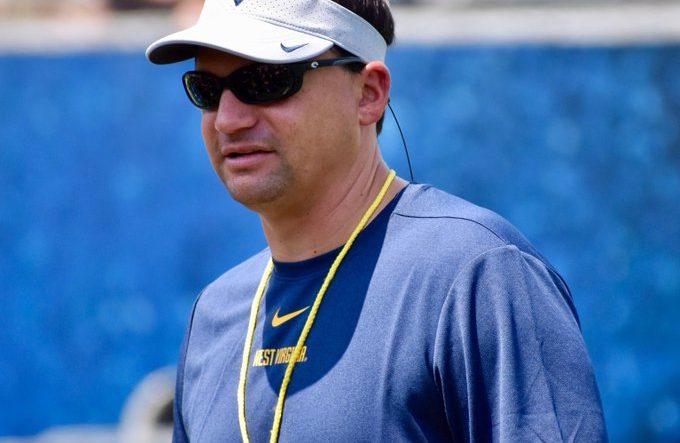 Coach Neal Brown released his depth chart for the season opener against James Madison. Though the story all summer was the battle for who starts at quarterback, there are many other positions that many people were wondering about. You can take a look at the depth chart here.

It comes as no surprise that Kennedy McKoy is the starting running back. He is backed up by Martell Pettaway and then Leddie Brown and Alec Sinkfield are both listed as the third stringers. Due to the amount of depth there was going to be somebody left out, but the way last season went, a case could be made that Leddie Brown had a great chance to start this season. He will still get some touches, but he’s an extremely talented guy who is sharing third string. The same could be said for Alec Sinkfield. Coaches have been raving about him all summer long, but he’s unable to crack the top two for the opener.

Running backs coach Chad Scott is looking for players to step up and lead, and he calls one guy out to help fill that role ⬇️ pic.twitter.com/QBx2yKwDzC

Freshman Sam James is another guy the coaching staff has been raving about. He has been rewarded with a starting spot in the Z-receiver position. Despite losing David Sills V, Gary Jennings Jr. and Marcus Simms, this wide receiver crew is going to be something to watch. Just after being named eligible, Sean Ryan is also slated to start along with Tevin Bush and T.J. Simmons. With George Campbell, Randy Fields Jr. and Bryce Wheaton as second stringers, this receiving crew has some depth.

Mike O’Laughlin has overtaken Jovani Haskins and T.J. Banks as the starting tight end. Haskins got into some trouble in the offseason and that could have played a role in this, but either way, the coaching staff has been impressed by O’Laughlin many times during the summer and he is someone to keep an eye on this season as a breakout star. He battled back from an ACL tear in his true freshman season and is now ready to step in and show what he learned from Trevon Wesco.

With Sam James returning kickoffs and Alec Sinkfield returning punts, there should be some big plays in the return game.

More Stories to Get You Ready for the Opener: