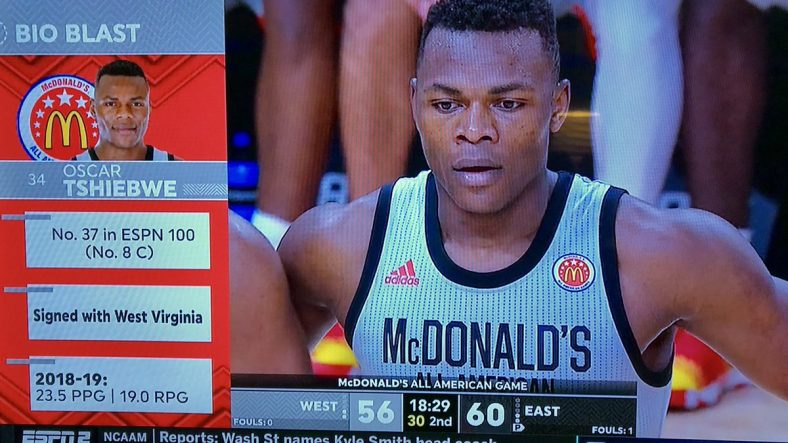 There was one player who recorded a double-double in the McDonald’s All-American Game in Atlanta. It just so happened to be WVU-bound Oscar Tshiebwe.

While playing for the West Team, Tshiebwe scored 12 points to go along with 10 rebounds in just 18 minutes of action. Talk about efficiency. He was 5-7 from the field and 2-2 from the free throw line.

Many scouts at the game took notice of the performance by Tshiebwe. It seems that he is now on the radar of many of them.

Isaiah Stewart was the most consistent competitor this week in @McDAAG practice. Oscar Tshiebwe was the one guy that most NBA personnel knew nothing about that impressed them the most. Each have been more than good tonight

Even though the Mountaineers just wrapped up a tough season, it’s easy to get excited about a roster of big men that includes Derek Culver, Sagaba Konate and Oscar Tshiebwe.

Oscar Tshiebwe has already made two moves tonight at the @McDAAG that he couldn't even have dreamt of this time last year. Impressive center headed to WVUhttps://t.co/jMfioMbCet

Bob Huggins is Looking to Bounce Back Quickly

There’s a good chance that by next year at this time the tough season of 2018-2019 will be a distant memory. Bob Huggins has given Mountaineer fans plenty of reason to be excited about the 2019-2020 season.

First off, remember how the Mountaineers finished the season in 2019? Pulling off two upset wins in the Big 12 Tournament, including a win over Texas Tech, the eventual national runner-up.

Now as icing on the cake, Bob Huggins is bringing in the top recruit of his stint as the Mountaineer head coach. Oscar Tshiebwe is the prototype Huggins big man. He can run the floor, he has incredible finishing ability and is an absolute terror on the glass. Whether he is in the half court set or running the break, Tshiebwe will have a major impact on this team. He will give Huggins the option of teaming him up with returning big man Derek Culver or adds the depth necessary to give Culver a break if he is tired of in foul trouble.

You can’t keep Bob Huggins down for long. Look for this team to make a huge leap next season. One writer at Mountaineer Sports has even predicted a worst to first resurgence.