Will Grier Will Not Play in Bowl Game 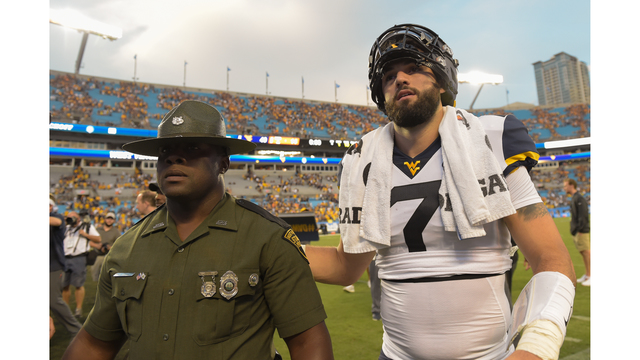 It’s official. West Virginia quarterback Will Grier will not play in the 2018 Camping World Bowl and instead will be preparing for the 2019 NFL Draft.

Despite this Will Grier will go down as one of the best quarterback in WVU history.

Will Grier wanted to share his thoughts on the issue with Mountaineer fans:

? A message from Will Grier… pic.twitter.com/4mOnm3dRcK

“Since arriving in Morgantown, Jeanne and I have been welcomed into the Mountaineer Family and we, along with Eloise, have been so blessed by the support and love of so many. I hope that, in return, you know that I have given my all and worked hard each and every day to help our football program and University.

“While we did not win every time we took the field, and I shoulder that responsibility, I can assure you that we tried. After discussions with Jeanne and my family, and after receiving professional input, I have decided not to participate in our upcoming bowl game and focus on preparing myself and my family for what I hope is the next step in our journey. I want to thank Coach Holgorsen, Coach Spavital and all of our coaches for believing in me and, most importantly, to my teammates, who are now lifelong friends who taught me the true meaning of TEAM.

“It has been an honor to wear the WVU uniform, and I sincerely thank all of Mountaineer Nation for allowing my family and I to be a part of something so special. Country roads, take me home…”

Despite not getting an invite, Will Grier was in contention for the Heisman Trophy the entire season. He finished up as a candidate for the Maxwell Award, the Manning Award, Walter Camp Football Foundation Player of the Year Award, the Johnny Unitas Golden Arm Award and the Senior CLASS Award.

Grier led the Mountaineers to an 8-3 record and were ranked for the entire season. He passed for 3,864 yards and 37 touchdowns and also had three rushing touchdowns in the 2018 season.

Will Grier graduated from WVU in December 2017 with a bachelor’s degree in multidisciplinary studies.

While it would have been great to see Grier in gold and blue one last time, we appreciate the time he did have in Morgantown.