Will Grier Signs His Rookie Contract with the Panthers 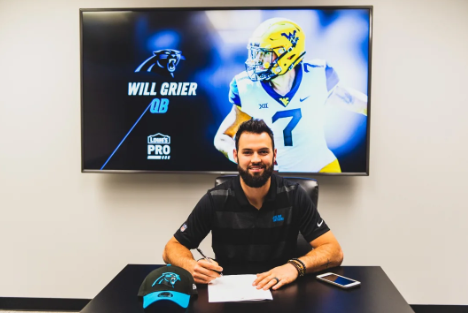 After being selected in the third round of the NFL Draft by the Carolina Panthers two weeks ago, Will Grier signs his rookie contract.

Grier has received a lot of attention for a number of reasons. First of all he has some local star power in Charlotte, being the former quarterback at Davidson Day. Then there’s the part where he is the first quarterback drafted by the Panthers since they drafted current starter Cam Newton back in 2011.

The former Mountaineer quarterback maintains that he is there to have Newton’s back, but of course in due time he’d like to be the starter for the Panthers.

“But Cam Newton is the starting quarterback of the Panthers. I have an awesome opportunity to just support him, do what I can to help this team win. And at some point, if I get an opportunity, I’ll take advantage of it.”

That’s called saying all of the right things.

Here’s what Cam Newton had to say about the Panthers drafting Will Grier:

“I wanna make sure I’m my best teammate, my best self, for everyone” ✊

On Friday the seven Carolina draft picks will get on the practice field for the first time in the team’s rookie minicamp.

Good luck in Charlotte, Will. We know you will make us proud.