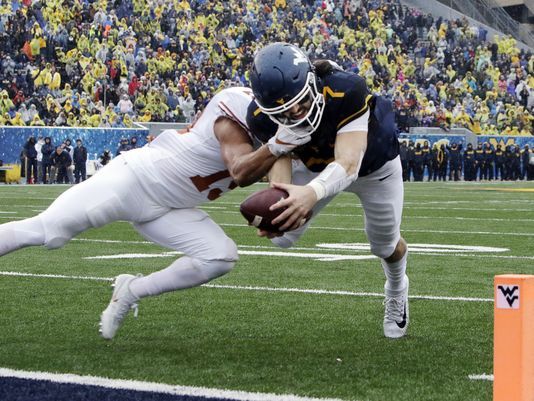 After success full surgery on the finger he injured near the goal line against Texas, Will Grier is “questionable” for the WVU bowl game.

Initially Grier was ruled out for WVU’s last regular season game against the Oklahoma Sooners and it didn’t look good for the bowl game.

Bruce Feldman of Sports Illustrated reported that it is possible that Mountaineer fans will get to see their star quarterback during bowl season.

SOURCE: #WVU QB Will Grier had surgery after his gruesome hand injury vs Texas. His return back in time for the Mountaineers bowl game is questionable.

The Mountaineers explosive offense really took a hit when Grier went out with the injury. Texas held the Mountaineers to just one offensive in a 28-14 win for the Longhorns.

Thank you for your love and support. Surgery went well- now time for a speedy recovery! @willgrier_

With or without Grier, most of the projections expect West Virginia to be headed to the Liberty Bowl in Memphis, Tennessee. This bowl is December 30th at 12:30 pm EST.

David Hale of ESPN sees it playing out differently. He expects the Mountaineers to take on the LSU Tigers. The Mountaineers last played the Tigers in 2010 and 2011 with LSU winning both contests.

So it looks like West Virginia will be playing the Tigers, just not sure which one. With a game left against the Oklahoma Sooners on the road there is still time to shake things up. And in case you missed it there is still an extremely outside chance of WVU sneaking into the Big 12 title game. Read how they can do that here.