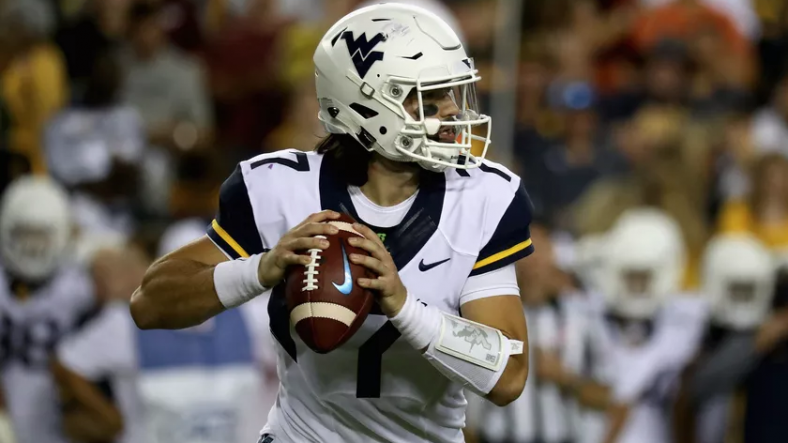 According to a report from NFL.com, the draft stock of Will Grier continues to climb. There is a buzz building around the WVU quarterback.

The scoop: “I think what happened is that with all the focus on the big three (Josh Rosen, Sam Darnoldand Josh Allen), quarterbacks like (Will) Grier (West Virginia), the Memphis quarterback (Riley Ferguson) and Jeremiah Briscoe (Sam Houston State) flew under the radar for a lot of scouts. Grier really has scouts taking notice now. … I need to start watching him because the production has been impressive.” — NFC scout

The skinny: The stats have indeed been impressive for the Florida transfer. Grier is completing 66.3 percent of his passes heading into Week 9, with 2,467 yards (No. 7 in the FBS), 26 touchdowns (leads the FBS) and just 5 interceptions. Grier’s completion percentage has benefitted from a fair amount of short throws, but 21 of his 26 TD passes have come via intermediate or deep balls.

His playing style reminds me of an even more excitable Baker Mayfield, but Grier doesn’t share Mayfield’s outstanding deep-ball accuracy. He might have flown under the radar previously, but NFL scouts are beginning to evaluate Grier’s strengths and weaknesses much more closely now.

I’d say any scout who hasn’t taken notice of Will Grier by now should be looking for a new line of work. The rest of the story goes on to talk about Mason Rudolph and how some scouts may have him as a first rounder.

Before Mountaineer fans clam up and start to worry that Grier may be leaving for the NFL after this season let’s just relax and enjoy the show for now. WVU has an elite college quarterback with all of the tools needed to succeed. Having Grier for this season is a heck of a thing for the Mountaineers. Could be much worse. Look at his former team, the Florida Gators. Grier had as many passing touchdowns against Texas Tech as their quarterbacks have all season.