Will Grier Labeled a “Riser,” Set to Meet With at Least Ten Teams 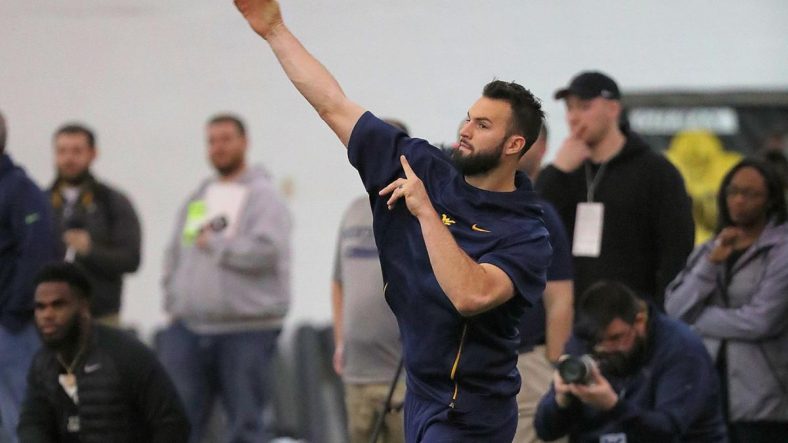 We have already reported that Mountaineer quarterback Will Grier “put on a show” at Pro Day, according to ESPN insider Adam Schefter.

One NFL scout in Morgantown, W.V., just texted that QB Will Grier “put on a show” for NFL Teams in attendance and predicted he’s “a riser.” The WVU QB is expected to meet with at least 10 teams before the draft, including the Giants, Redskins, Chargers, Pats and Saints.

There were representatives from all 32 teams in attendance to take in Grier’s performance. This included head coaches Mike Tomlin, Jay Gruden and Pat Shurmur along with executives  Kevin Colbert, Marty Hurney and Nick Caserio. This is according to Aditi Kinkhabwala of the NFL Media.

Will Grier with the pump fake and throw to David Sills. pic.twitter.com/Wh117VXxOm

It was also reported that Grier went to dinner with Panthers offensive coordinator Norv Turner and had steak and a salad. After that he went for sushi with Redskins coach Jay Gruden. There was no report on whether or not he went for dessert with another coach.

WVU QB Will Grier had two dinners last night: steak and salad w/ the #Panthers Norv and Scott Turner and a sushi roll w/ the #Redskins’ Jay Gruden. He’s meeting w/ the #Giants today. The way he distinguishes himself from other QBs, he said? By showing what a playbook junkie he is

Among the ten teams that plan on meeting with Grier are the Giants, Chargers, Patriots, Saints and Washington.

During his senior season with the Mountaineers , Grier completed 65.7% of his passes and threw for 7,354 yards to go with 71 touchdowns and 20 interceptions.

Will Grier isn’t the only Mountaineer garnering attention. Despite not being a main target at WVU, TE Trevon Wesco is getting attention for his size and athleticism. The Eagles asked him to do some extra working during the QB-WR script and impressed with his great hands and ability to run.

TE Trevon Wesco (6-4, 270) is a big, strong body who wasn’t a main target at @WVUfootball last year (26 catches). But the #Eagles asked to see him do extra in the QB-WR script and he showed great hands, and a deceiving ability to run. Good day for him; remember that name.

The Steelers and Patriots spent time with Gary Jennings Jr. and David Sills V yesterday before the Pro Day began. They both were also set to meet with the Saints and Lions.

Steelers ILB coach Jerry Olsavsky was in attendance at the WVU Pro Day. WVU linebacker David Long Jr. ran a 4.45 40 and there has been speculation this is someone the Steelers have had their eye on.

When ILB David Long ran that 4.45 40, it wasn’t discussed much. In fact, his name is not brought up with the likes of Bush and White. Long is a stat stuffer at ILB and should be a serious consideration for Steelers. https://t.co/eGsMK8PeVc #SteelersDraft https://t.co/zkcnzPt6Lb

Will Grier mentioned that West Virginia will always hold a special place in his heart, but he’s ready to move on to the next chapter in his life.

“This is part of transitioning into being a professional,” Grier said. “I’ve treated it like it’s my job, and it’s only going to get more and more intense. I want to be the greatest that’s every played, and that’s going to take a lot of hours and a lot of reps and a lot of work. I have an opportunity to go play in the League now and make this my job. I’m going to do all I can to take advantage of that opportunity.”

Plenty of Mountaineers will be coming off the board at the 2019 NFL Draft.