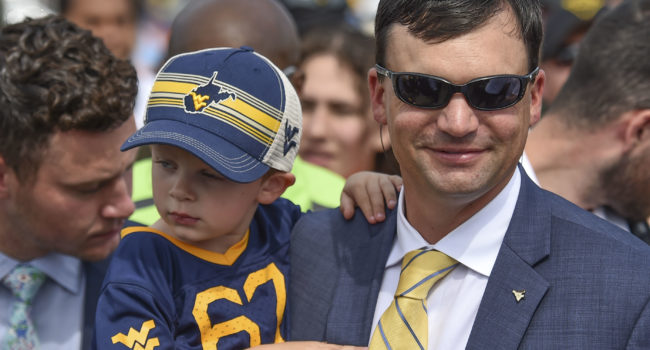 Despite the WVU football team suffering a tough home loss against Texas, there is plenty of good to take away from the game. The Mountaineer defense held up well against one of the top offenses in the country for three quarters. Despite four interceptions, WVU was able to rack up some serious yardage through the air. West Virginia had the ball with the chance to take the lead in the fourth quarter. This is very much a transitional season, but the team gave the No. 11 Longhorns a run for their money.

The action on the field wasn’t the only reason to love this team. Why we love our Mountaineers is they are playing for the state. In Neal Brown’s pregame speech prior to the game against Texas, he was quoted as saying, “We fight for this state and the guy next to us!”

Neal Brown is the man for the job. He understands what this team means to the state of West Virginia. Brown is instilling discipline and strong values in his team as a foundation. The game plan will come together in time.

Then there was this tweet from Darius Stills. The homegrown defensive lineman whose father was a stud for WVU and grew up just 20 minutes from Mountaineer Field.

Former West Virginia quarterback turned television analyst Rasheed Marshall put it best following the Texas game:  “Maybe not be this season but in the next 2/3 seasons WVU will be a force in the Big 12.  The amount of young talent is scary!  James, Ryan, Wheaton, Fortune, T. Smith, B. Mays, Raines, Martin, Jefferson.  They’re all getting valuable experience right now!”

Maybe not be this season but in the next 2/3 seasons WVU will be a force in the Big 12. The amount of young talent is scary! James, Ryan, Wheaton, Fortune, T. Smith, B. Mays, Raines, Martin, Jefferson. They’re all getting valuable experience right now #TrustTheClimb @WVUfootball

It’s going to be fun to watch this team grow.

Up next for the Mountaineers is a visit from the Iowa State Cyclones. The game is set for a 4 p.m. kickoff on Saturday.

Let’s get back in the win column, boys!