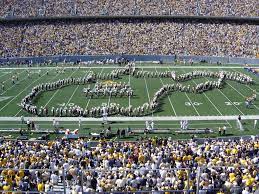 One of the first things Bob Huggins wants his players to learn is the importance of Mountaineer Sports to the people of the state of West Virginia.  It’s something most people don’t understand and when they attempt an explanation we’re left saying, “Yeah, but…”

TV announcers say the reason we are so passionate about WVU is that we don’t have any pro sports teams and so the Mountaineers are the only game in town.  It’s true that we don’t have a pro sports team, but there are plenty of other games in town, so to speak.  I know numerous Mountaineer fans who cheer on the Steelers, Browns, Bengals, or Redskins.  (Yeah, I know they were bullied into dropping Redskins, but I don’t like bullies so I’m being stubborn.)

We also have another Division I team in the state in Marshall and they’ve turned out some good football in the last few decades.  There are also some pretty good college teams in neighboring states people in West Virginia could cheer for if they wished.  Many people in the state are closer to some out-of-state teams than they are to Morgantown.  I recall back in the late ’90s the Beckley newspaper trying to cram Virginia Tech down readers throats and justifying it by giving us a geography lesson by saying Beckley was closer to Blacksburg than Morgantown.  They even broke down the numbers of college graduates in the area to justify putting the Hokies over the Mountaineers in the sports section.

That slight to our Mountaineers prompted me to write a letter to the editor where I felt compelled to give the editor a history lesson.  It was that history lesson that sums up, for me at least, why West Virginians are so passionate about WVU sports.

How many of us have heard jokes about our state and people?  Those jokes, though not meant to cause harm, create a stereotype of our state that’s hard to shake.  I wasn’t aware of this, but apparently, we don’t wear shoes, have teeth, or know how to talk the English language properly.

All that means that we have a chip on our shoulders.  So when someone says something nice about us, we perk up our ears and stick out our chests.  When the Mountaineers make us proud, we’re a bit prouder of our team than other college fans from states that don’t suffer from incessant teasing.

We are treated like the ugly stepsister who doesn’t get the chance to go to the ball.  Therefore, when our team shines it’s like we get to go to the ball and dance the night away.  We are exhilarated and proud beyond measure.  No one else will ever understand because no one else comes from a state that is so ridiculed by those who don’t know us.

When the Mountaineer football team takes the field this fall, it’s not our university against your university, it’s our state against everyone who has ever made fun of us or called us ignorant hillbillies.  When we beat your team, it’s vindication and revenge all wrapped up in one.  When the basketball team takes the court and beats the bigger name teams, and they all seem to be bigger name teams, then those taunts and jabs we’ve had to endure all fall away into a satisfaction no other citizens of a state can understand.

That’s why when Tony Caridi says, “It’s a great time to be a Mountaineer, wherever you may be,” it resonates with us.