Why is WVU a Double-Digit Dog Against Lowly Missouri? 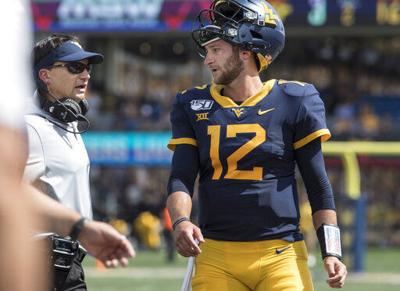 West Virginia was able to pull out a close win over James Madison in the season opener. Meanwhile, Missouri lost to Wyoming on the road by a final score of 37-31. This begs the question, why is WVU a double-digit dog against lowly Missouri? The line opened up as Missouri -12.

Sure, West Virginia had a tough time with FCS James Madison, but there are many reasons for that. First, the Dukes are an FCS powerhouse. This wouldn’t have been their first win over a Power 5 team. Ahem, Virginia Tech, ahem. Also this was the first game of the Neal Brown era at WVU. The players were obviously tight for a large part of the first half and despite this they were able to take control early in the fourth quarter and then hang on for the win.

This is a Wyoming team coming off of a 6-6 season. Missouri was able to defeat them last season by a score of 40-13. Wyoming had to win their final four games of the season to get to .500.

More important than the fact that Missouri lost was how they lost. They were ran over by the Wyoming ground game. Wyoming quarterback Sean Chambers was 6-of-16 for 92 yards. the Cowboys rushed for 297 yards and forced three Missouri turnovers.

The fact that such a one dimensional team was able to beat the Tigers indicates that this game between Missouri and West Virginia should be at least an even matchup. While West Virginia wasn’t able to get the ground game going, that will certainly be a focus in practice this week. James Madison has a surprisingly stout running defense and despite the lack of success by West Virginia, the Mountaineers still have four established running backs who will get some touches against Missouri. Neal Brown will be looking to make the necessary tweaks to get the ground game rolling.

A lot of the hype for Missouri is based around Kelly Bryant transferring there from Clemson. Bryant was able to throw for 423 yards, two touchdowns and an interception against Wyoming. This was much more than Bryant was asked to do when he was the quarterback at Clemson. If Kelly Bryant is asked to drop back 48 times against West Virginia, the Stills brothers will be bringing the heat.

To answer the initial question, there are a number of reasons as to why the Mountaineers are double-digit underdogs against Missouri. First, this was a team that had a win total of five for the 2019 season. Five win teams don’t win many games on the road. Obviously the oddsmakers don’t think much of this team. Second, West Virginia had a very difficult time getting a win at home over an FCS team. Sure, James Madison is one of the best FCS teams, but still that wasn’t a good look and the oddsmakers know that the people who took notice of that will be willing to lay some points with Missouri. When you combine the home field advantage with having the established quarterback, the line was set at -12.

As stated above, there are some solid reasons for the Mountaineers being double-digit underdogs. That said, if the Stills brothers and the rest of the Mountaineer pass rush can get to Bryant and Neal Brown is able to get his running game going, this team will have every opportunity to steal a win in Columbia.