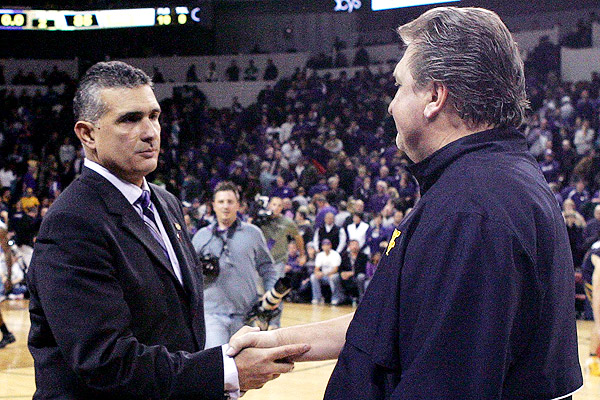 Why Can’t Bob Huggins Land Top Recruiting Classes at WVU Like He Did at Kansas State?

One thing Bob Huggins hasn’t been able to do in Morgantown is bring in the stud recruiting classes like he did at Cincinnati and Kansas State.

Why Can’t Bob Huggins Land Top Recruiting Classes at WVU Like He Did at Kansas State?

West Virginia head coach Bob Huggins has done many great things in Morgantown. A Final Four and five Sweet Sixteens, for starters. But one thing he hasn’t been able to do is bring in the stud recruiting classes like he did at Cincinnati and Kansas State.

First off, this upcoming recruiting class is great, but Oscar Tshiebwe is the first McDonald’s All-American to commit during the Huggins era. So he is trending in the right direction when it comes to bringing top recruits to Morgantown.

Let’s take a look at the recruiting success Huggy Bear had in Manhattan, Kansas. Bob Huggins coached Kansas State for one season. Despite this, he had two incredible recruiting classes that ranked among the best in the country. The 2006 class featured Bill Walker, who was ranked among the top ten prospects n the nation. The 2007 class was even better. It was widely recognized as the best recruiting class in the country. The class included Michael Beasley, who was the No. 1 recruit in the country. Beasley was a first-team All-American in his lone season at Kansas State and was drafted second overall by the Miami Heat. The recruiting class also included Dominique Sutton, who was one of the top shooting guards in the country, along with guards Jacob Pullen and Fred Brown. This recruiting class, combined with the 2006 class which featured Bill Walker, was what turned the Kansas State basketball program around. (Sidenote: Bill Walker has since decided to go by his middle name “Henry” which made finding information on him very tricky.)

Not only did Huggins leave some great basketball players in Manhattan, but he also left his assistants behind. In 2011 Huggins was interviewed before a road game against Kansas State and he said, “They ought to be happy I left. Frank has done an unbelievable job. From coaching to recruiting, he’s done a phenomenal job. Some people were upset. That was the initial reaction.”

He has a great point. Saying they should be happy he left is certainly a stretch, but his replacement Frank Martin took his team to the NCAA Tournament four out of five seasons and was able to get them to an Elite Eight in 2010. After Martin left he was replaced by Bruce Webber and they have made the tournament in five of Webber’s seven seasons.

While Huggins has done a decent job recruiting at West Virginia, he hasn’t pulled a class that is on the level of the one he had at Kansas State.

Before Kansas State there was Cincinnati. While at Cincinnati Huggins was able to land big-time recruits like Kenyon Martin, Nick Van Exel, Danny Fortson and Ruben Patterson along with many others.

Obviously the recruit rankings aren’t 100 percent accurate. Some of Bob Huggins’ best recruits turned out to be non-factors in the program. Bob Huggins has landed the following four-star recruits at West Virginia: Esa Ahmad, Jabarie Hinds, Noah Cottrill, Dalton Pepper, Kevin Jones and Devin Ebanks. Ebanks was actually a five-star, but he was landed as a result of the scandal involving Kevin Sampson at Indiana, so it was a unique situation. Those players produced varying degrees of success, but outside of Kevin Jones, none of these guys could be centerpieces on a team making a deep NCAA Tournament run. A large portion of this list is a who’s who of WVU basketball busts.

The recruiting class that included Jevon Carter and Daxter Miles brought as much success as any four-year run in Mountaineer history. Those two just happened to be a couple of hard-working three-star recruits. Carter turned out to be one of the best guards in Mountaineer history. They led the Mountaineers to three Sweet Sixteens in four seasons. In their junior year they were eliminated by Stephen F. Austin in the first round of the NCAA Tournament. Sorry for bringing that up.

While recruiting isn’t the only factor when it comes to success in men’s college basketball, it’s obviously a big one. Without landing top recruits, it makes a season like the 2018-2019 one possible. Even though West Virginia had plenty of experience returning, they weren’t able to get into the tournament due to the lack of experience. That combined with injuries and a rash of attrition turned this season into a very forgettable one.

Would an incoming five-star recruit or two have changed the way the 2018-2019 season played out? There’s no way to tell, but a wing player who could go out and get 15 points a night would have certainly brought in at least a few more wins. Without those types of players coming to Morgantown, it makes it very difficult to avoid a transition year every three or four years.

Despite the growing pains, West Virginia was able to give the fans reason for optimism near the end of this season. Freshmen Derek Culver, Jordan McCabe and Emmitt Matthews Jr. along with junior Jermaine Haley give the Mountaineers a great trio to take into the upcoming seasons. And it just so happens big-time help is on the way next season. Oscar Tshiebwe, the first McDonald’s All-American of the Bob Huggins era, is set to arrive in Morgantown, along with guard Miles McBride.

Bob Huggins has had plenty of success during his time in Morgantown, but many times his teams were just a five-star recruit away from contending for a national title. It just so happens that the Mountaineers have that guy coming to join a team that has gained loads of valuable experience during a turbulent season.

So why hasn’t Bob Huggins been able to recruit to Morgantown like he did to Manhattan? Sometimes greatness takes time.

It’s a great time to be a Mountaineer, wherever you may be.

Bob Huggins Named “Sexiest Man Alive” in West Virginia
Neal Brown on His Team: ‘We’re Going to be Great. It’s Not an if to me, It’s When’