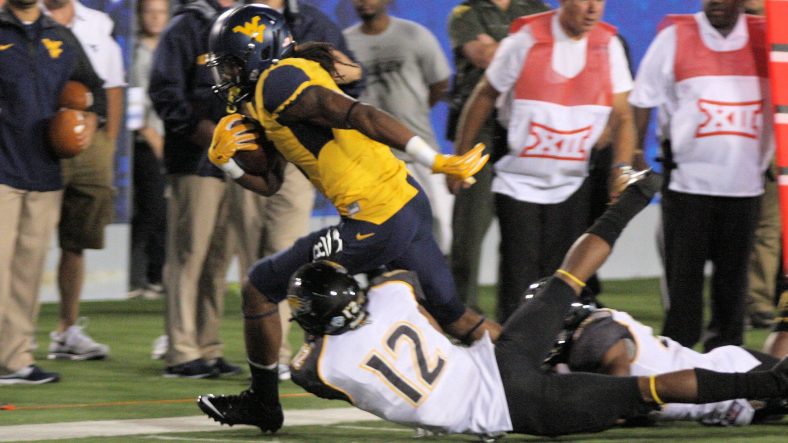 West Virginia lost its second game of the season, falling to Oklahoma 45-33 on Saturday. The teams entered halftime tied up 24-24, but the Sooners literally ran away from the Mountaineers in the second half as true freshman running back Samaje Perine racked up 242 yards and 4 touchdowns to earn the win.

For West Virginia, Clint Trickett again put up impressive numbers throwing for 376 yards and 2 touchdowns. Additionally, Kevin White and Mario Alford both eclipsed 100 yards receiving. Defensively, Wes Tonkery excelled with 8 tackles (1.5 for loss) and an interception. An announced crowd of 61,908 watched the game, the highest since the 2011 matchup against LSU.

Despite the 2-2 record, West Virginia has shown noticeable improvement on offense from the 2013 season. While Clint Trickett has (deservedly) received much of the credit for that, the most improved player from last season could be senior wide receiver Kevin White.

White joined the Mountaineer roster in 2013 coming from Lackawanna Junior College in Pennsylvania. Entering the season, he had hopes of picking up where the departed Stedman Bailey and Tavon Austin left off, but he fell well short of his goals. He ended up pulling in 35 catches for 507 yards and 5 touchdowns. Respectable numbers for sure, but far short of what is expected by a top receiver in Dana Holgorsen’s air raid offense.

White’s performance through the first 4 games of 2014, however, has been nothing short of stellar. He has already eclipsed last year’s performance with 42 catches for 633 yards and 3 touchdowns. At his current pace, White could even exceed the WVU single-season records of 114 receptions and 1,622 receiving yards held by Stedman Bailey.

The main difference for White between this year and last? According to Holgorsen, the answer is simple: consistency.

“We thought he had some potential,” Holgorsen said. “We saw some flashes of it last year, some flashes of it in the spring and camp. What I’ve been happy with is the consistency that he’s played with. He’s shown flashes of being a great player in the past but not consistently…The only ones doing it consistently at the skill spots (now) are Clint (Trickett) and Kevin (White).”

White will have to continue his consistent play in order for the Mountaineers to complete their turnaround from last year’s disappointing 4-8 season. In order to do so, the team will have to take care of business against Kansas in the team’s next game on October 4th.