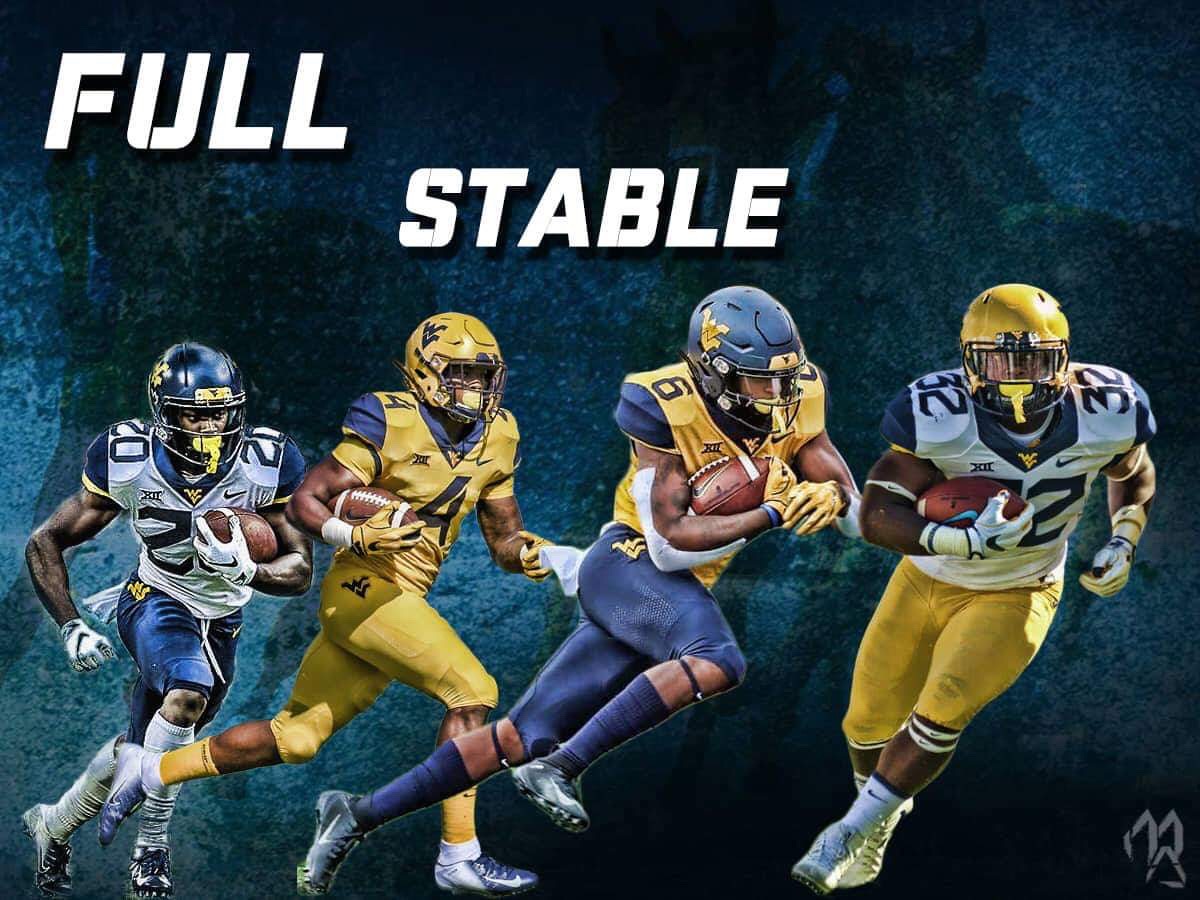 Which Running Back Has the Best Chance to Break Out?

Although uncertainty clearly abounds for the players in charge of making holes for them, running back should be a strong position for the Mountaineers next season. Even still, the question of who the lead rusher will be in 2019 remains.

Which Running Back Has the Best Chance to Break Out?

Although uncertainty clearly abounds for the players in charge of making holes for them, running back should be a strong position for the Mountaineers next season. Even still, the question of who the lead rusher will be in 2019 remains.

We’ll start with WVU’s most experienced running back (going by career games played; 37), the six-foot, 208 pound senior from Lexington, North Carolina, Kennedy McKoy. McKoy ran the ball last season for 802 yards on 145 carries, finishing fifth in the Big 12 in yards per carry (5.5). He also caught the ball 17 times for 224 receiving yards, pushing his total yardage for 2018 to a career-best 1,026 yards. McKoy found the endzone nine total times and ranked eighth in the Big 12 in rushing yards per game (66.8).

Despite all of McKoy’s accolades and clear signs of improvement, he did not play in this year’s spring game on April 13th. The decision likely had to with McKoy’s health, as Coach Neal Brown reported the week prior to the official Gold-Blue game that McKoy rolled his ankle in the team’s scrimmage on April 6th. Whatever the case may be, we hope to see McKoy taking handoffs next fall with similar production.

Next, we have the five-foot-nine, 205 pound senior from Detroit, Michigan, Martell Pettaway. Pettaway was the second-leading rusher for the Mountaineers last season, running for 623 yards on 98 carries, putting his yards per carry average at 6.4. He caught the ball six times for 61 receiving yards and returned one kick for 37 yards, making his total yardage last season to be 721. Pettaway finished 2018 with seven total touchdowns, including a beautiful 55 yard score against the Texas Downhorns.

Pettaway did see action in this year’s spring game, but did not impress as a rusher. In fact, the running attack as a whole was virtually absent in the scrimmage, earning only 64 yards on 49 attempts, according to Greg Hunter of BlueGoldNews. Besides the offensive line concerns publicly noted by Coach Brown (as well as a few untimely injuries to first–teamers Kelby Wickline and Colton McKivitz), Pettaway mentioned the difficulty in facing the current defense in a players media session on April 4th.

“Well, we’ve never seen a defense like this before,” Pettaway said. “They disguise a lot of different things in plenty of different ways.”

Third, we have the six-foot, 214 pound sophomore from Philly, Leddie Brown. Of all the running backs who played in the spring game, Coach Brown praised Leddie Brown the most following the game.

“I thought [Leddie] Brown had a really nice day and showed what he has shown us all spring,” Coach Brown said. “He has been really consistent, and when I use that word consistent, I think that is one of the best ways I can describe someone on our football team.” Brown led all rushers from scrimmage with 34 yards and a long of 13.

As a freshman, Brown finished last season playing in 11 games, rushing for 446 yards on 91 carries. Brown averaged 4.9 yards per carry and caught the ball twice for 40 yards. He found the endzone a total of five times in 2018.

In a players media session on April 9th , Brown agreed that running backs would be expected to catch the ball more next season and mentioned his experience as an inside slot receiver in high school. Regarding the new offense, Leddie mentioned in a separate session in late March that he liked “the role of the running back,” adding “we have a bigger role in this offense than we did in the last offense and I think all of the running backs are going to have a pretty good season this year.”

Finally, we have the five-foot-nine, 186 pound redshirt sophomore from Delray Beach, Florida, Alec Sinkfield. As a redshirt freshman, Sinkfield saw action in just five games last season, earning 68 yards on 19 carries and finding the endzone a single time. The young Sinkfield provided a productive spark as a receiver, catching four passes for 44 yards.

Prior to the start of April’s Gold-Blue affair, Sinkfield was one of four players recognized as an Iron Mountaineer for his work in WVU’s offseason strength and conditioning program.

When asked by the media following the spring game who he would compare himself to, Sinkfield said he thought he “had a little bit of L.T. (LaDainian Tomlinson).” Interestingly, Sinkfield also said he thought Leddie Brown has seen the most improvement, “but not at running back, I think his activity in special teams, the way he took on the role of a special teams player is impressive,” said Sinkfield.

Sinkfield also seems to have a good head on his shoulders, having made the Academic All-Big 12 Second Team in 2018.

So, they all have potential to contribute greatly to next year’s offense. Each has previously shown an ability to run and catch as needed. While the run game floundered in this year’s spring game, perhaps we can blame it partly on some untimely injuries suffered by first-team offensive linemen. Their lack of production might also be very much related to a talented, experienced and schematically tough defense coached by new coordinator Vic Koenning.

Mountaineer Memories: WVU Marches into Blacksburg and Takes Down No. 13 Virginia Tech – 2002
The Mountaineer Sports Interview with Oscar Tshiebwe