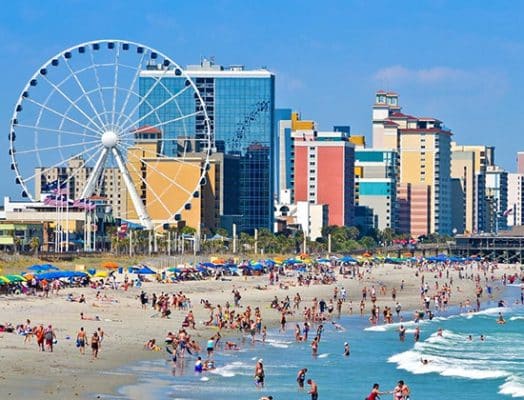 While vacationing this week in Myrtle Beach, South Carolina, aka “West Virginia South”, coming across fellow West Virginians is not a rare occurrence; it’s actually quite common.  We’re everywhere here.  Myrtle Beach is a quick 8 and 1/2 hour trip down I-77 South and it’s the place to be for Mountaineer fans in the summer/offseason.

Nearly all West Virginians make it abundantly clear where they’re from by adorning themselves and their vehicles with flying WVs.  There are West Virginia tents, drinking bottles, flip flops, etc. all over the beach.  I’ve walked by hundreds and hundreds of West Virginia fans in the past few days but somehow made the awful mistake of not bringing a West Virginia hat or any WVU gear to show my undying allegiance to the school and state that I love.

My car of course has a flying WV on the back and I shared a few honking back and forths with other West Virginia fans on the trip, but ultimately West Virginians need a hand symbol to easily identify ourselves.  When a Texas Longhorns fan comes across another Texas Longhorns fan, it’s very easy to throw up “Horns Up” to recognize that they are in the company of another Texas fan.  Houston has one too.  In fact, many schools do.

This is not only a quick, easy way for fans to show their allegiance to their school, it’s also a great sign to throw up at games.  There are many parts of WVU games that are outstanding (the “Let’s Go Moutaineers” chant for example), but many that could use adjustments (the “First Down” routine, for one) and the lack of hand symbol is a glaring weakness.

With that said, a few possibilities came to mind.   The above photo of a hand gesture that appears to look similar to the great state of West Virginia would be a fantastic option, but it could also lead to several issues with its close propinquity to the flipping someone off.  This would have to be used very cautiously or the odds of offending someone would be high.  Also, doing this to someone who you think is a West Virginian and turns out to not be could lead to big problems.

West Virginia’s most obvious hand symbol should the sign language version of W and V.  With the left hand, you simply put up your index, middle and ring fingers to form a W.  With your right, you put up your index finger and middle finger to form a V.  Simple, easy to do and very, very effective.

When you see a fellow Mountaineer on the beach, passing by on the interstate, in the store, or at a game, throw up your W and V to show your support for West Virginia!