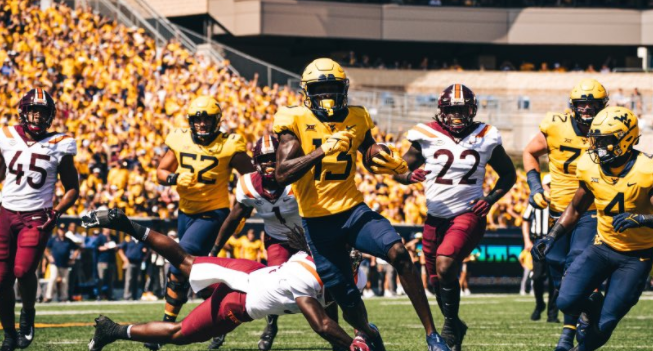 Morgantown, West Virginia – The Battle for the Black Diamond Trophy between bitter rivals the West Virginia Mountaineers and the Virginia Tech Hokies started with West Virginia’s Leddie Brown running for 80 yards for a touchdown.  Virginia Tech made a major comeback, but fell short in the closing minutes.

The Mountaineers (2-1) handled a late comeback attempt by #15 ranked Virginia Tech (2-1), winning 27-21 to bring the Black Diamond Trophy back to where it belongs in Morgantown, West Virginia.

Redshirt senior quarterback Jarret Doege was inaccurate at times, but played tough and finished 15/26 for 193 yards, 2 touchdowns and 1 interception.  Garrett Greene received a handful of snaps and went 0/1 passing with 2 rushes for 16 yards.

Senior running back Leddie Brown had his best game of the season, rushing for 161 yards on 19 carries.  West Virginia wide receivers played really well today as well.  Isaiah Esdale had 3 catches for 45 yards, Sam James had 2 catches for 46 yards, Sean Ryan had 2 catches for 23 yards and Bryce Ford-Wheaton had an outstanding 29 yard touchdown reception.

The Mountaineers will now have their most difficult game of the season next weekend against Oklahoma on the road.  West Virginia opened up as 19 point underdogs prior to today’s game.  The game will be televised live next Saturday, September 25th at 7:30PM on ABC.