West Virginia versus Houston in a Bowl Game This Season 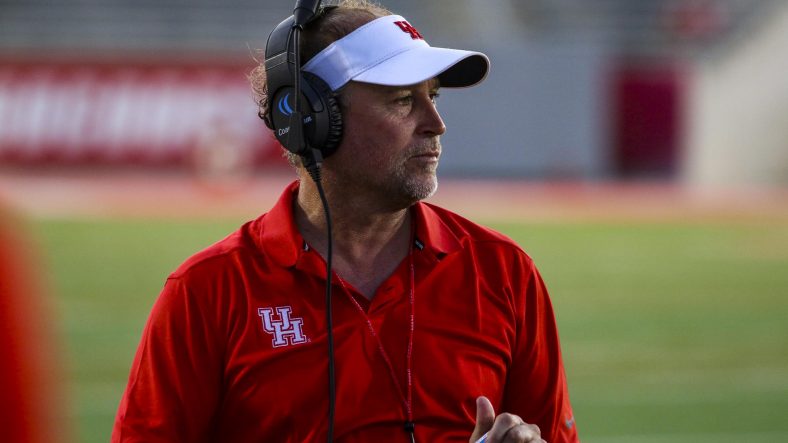 Several very early bowl projections have been released following the 3rd week of the season and a few of the projections see the Mountaineers playing in SERVPRO First Responder Bowl, a game played on December 28th at the Cotton Bowl Stadium in Dallas, Texas.

One projection in particular was noteworthy; College Football News projects WVU to play against the Houston Cougars!  This, of course, would be interesting for West Virginia fans who would like nothing more than to give new Houston Head Coach Dana Holgorsen a beatdown for a variety of reasons.  Here’s a few: 1.) The way he left WVU. 2.) Not recruiting in-state prospects and blaming the state for not having enough talent to compete in the Big 12. 3.) He really needs his butt kicked.

Obviously a lot would have to happen for everything to line up and for this matchup to take place.  Both teams would naturally have to be bowl eligible and West Virginia would need a winning record and finish somewhere near the bottom of the Big 12 Conference.  The Sugar Bowl, Alamo Bowl, Camping World Bowl, Texas Bowl, Liberty Bowl and Cheez-It Bowl would have to choose bowl-eligible teams ahead of the Mountaineers and WVU would have to accept the invite to the First Responder Bowl.

Holgorsen’s Houston Cougars are currently 1-2 after losses to the 5th ranked Oklahoma Sooners and 22nd ranked Washington State Cougars, but have a very favorable schedule and should be favored for every remaining game except against #15 Central Florida.  They will almost certainly finish with a winning record this season and be bowl eligible.  A matchup between Holgorsen’s former school and current school would be attractive for bowl organizers and fans from both universities.

Any bowl game would be a huge victory for a rebuilding West Virginia team and an opportunity to pummel the Holgorsen-led Houston team would be icing on the cake!