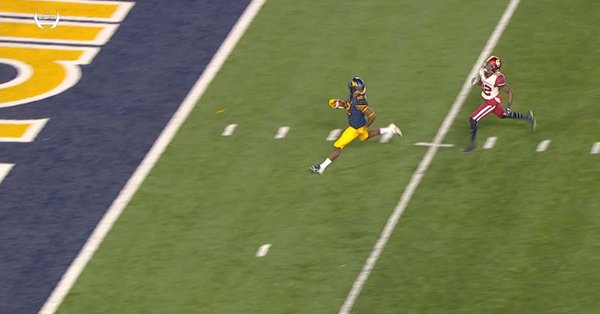 Defense might win championships, but offense gets TV ratings. West Virginia-Oklahoma was ESPN’s highest-rated Friday game in eight years. Additional to that it was the highest-rated black Friday game among all networks since 2015.

When you compare the ratings to last year’s Virginia-Virginia Tech match-up played at night on Black Friday on ESPN, the 3.4 rating was a 162 percent increase. West Virginia-Oklahoma was also the second-highest rated game televised by ESPN this season only surpassed by Virginia Tech-Florida State on Labor Day.

After the loss to Oklahoma, West Virginia fell three spots to No. 15 in the AP Top 25 and four spots to No. 16 in the Coaches Poll. The Mountaineers have likely sewn up their first time they spent the entire season being ranked since 2007. That season West Virginia started at No. 3 and ended up at No. 6.

The Mountaineers come in at No. 15 in the AP Poll and No. 16 in the Coaches Poll #HailWV pic.twitter.com/Nfx5rToZ9P

Despite the loss, it was a proper send-off for senior quarterback Will Grier. He was 32-of-49 for 539 yards and four touchdowns.

That was in only 3 quarters ? pic.twitter.com/qDdxuKDMTt

In Grier’s 22-game career as a Mountaineer he has went 516-of-785 for 7,354 yards and 71 touchdowns to go with 20 interceptions. Seeing Will Grier in the Mountaineer uniform has been a pleasure for all involved.

Had Grier been a four-year starter at WVU he would have set some lofty all-time records for future Mountaineer quarterbacks to chase.

The Big 12 will hand out its conference players of the year and all-conference teams later this week. The Mountaineers happen to have great players at positions where other teams have great players. For example, Will Grier will not make the all-conference team ahead of Kyler Murray and the number of high-level wide receivers in the Big 12 is incredible. Look for David Long Jr. to make the first team and possibly left tackle Yodny Cajuste.

David Long Jr. is the only Power 5 player to register at least 1️⃣ tackle for loss in every game this season. He had 4️⃣ last week against TCU. ?? pic.twitter.com/KYoXz0uZRY

As far as bowl projections it looks like the most likely scenarios are taking on Syracuse in the Camping World Bowl or Washington State in the Valero Alamo Bowl.

Imagine a shootout between Dana Holgorsen and Mike Leach. That would definitely be something worth checking out.