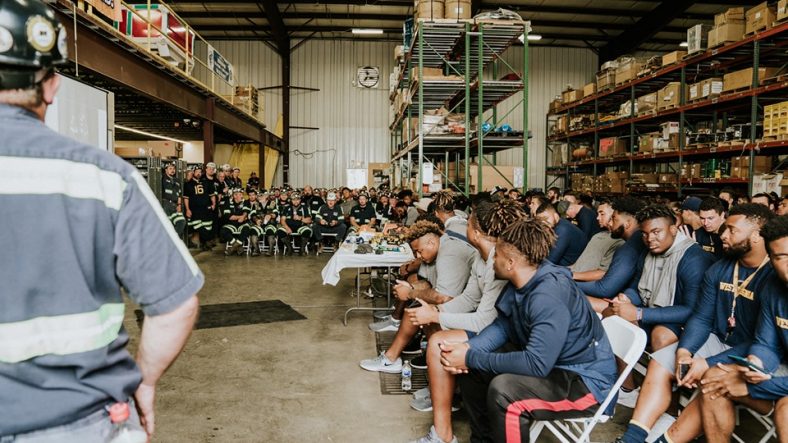 Recently the WVU football program took a trip to the Leer Mining Company in Grafton. Neal Brown took them there to get a closer look at the hard working men who West Virginians take a great deal of pride in.

Fairmont, West Virginia native Darius Still was particularly impressed with what he saw during the visit.

“I learned a lot more than I expected too,” Darius Stills said, per DVN. “It’s not an easy job. You’re going down underground for 10 plus hours, not knowing if you’re going to make it out. It’s a mental thing. I appreciate the coal miner’s for doing that for their family and they’re doing for the whole state, honestly.”

“Being from West Virginia you hear about the coal mines, but only a few select people get to witness what actually goes on down there.” Stills continued. “We harp on it a lot the ’blue-collar mentality. We come from the coal mines’ and all that stuff. But you, especially from out-of-state, you never get to see it. So, us as a team going out there, it really put a different perspective on us.”

Another player impressed by the trip was offensive guard Josh Sills. He said that in order to truly understand what the miners go through, you need to see it in person.

“It was awesome, very humbling and eye-opening,” Sills said. “You see the guys that go to work every day and break their back for themselves and their families. It’s one of those things that when you see it on a slide show, a lot of people aren’t from here, so it doesn’t mean as much to you as it does when you see it in person. Luckily enough for us, we were getting ready to leave, they had a shift change. So, they were getting ready to send the minors down, well there was a shift that came out. So, when we were walking out, we got to see everybody and you to see how dirty they were. You just tell looking at them they were exhausted, and I really think that put in perspective for everybody.”

Neal Brown takes things a step further when not only does he want to coach the football team, he wants to understand the culture of the state his team represents. This was a great experience for the coaches, players and especially the hard-working minors. How excited were they to show Neal Brown and his players around their workplace?

Great job Neal. You are making West Virginia proud on a daily basis.