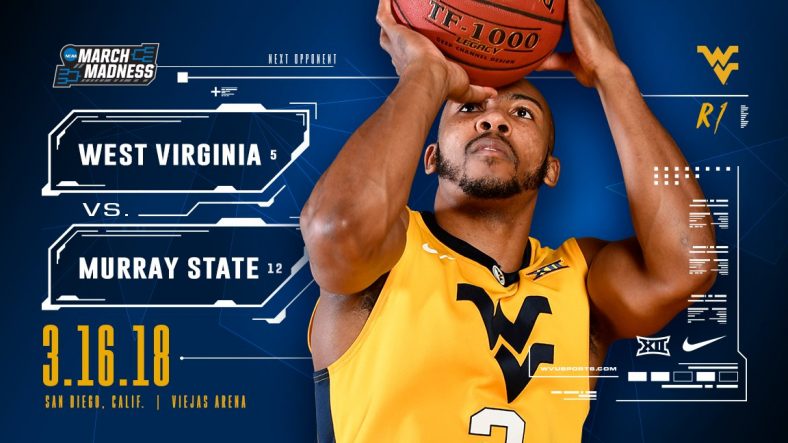 West Virginia earned an at-large bid after coming up short in the Big 12 Tournament championship game on Saturday to Kansas. Murray State comes into the tournament on a 13-game winning streak, defeating Belmont by a score of 68-51 to win the Ohio Valley Conference championship.

Some of the best ???? from Selection Sunday! #MarchMadness pic.twitter.com/mFC18Vl2j9

This makes Bob Huggins 9th trip to the NCAA Tournament as the head coach of the Mountaineers. Over the last 14 years, West Virginia has made 11 trips to the Big Dance.

How to watch the game online: NCAA March Madness Live

How to listen to the game: Mountaineer radio affiliates or the TuneIn app.

The West Virginia Mountaineers went through a very difficult schedule. WVU took on, and defeated, No. 1 overall seed Virginia and also took on, and lost, No. 1 seed Kansas three times, including a matchup in the Big 12 Tournament final.

Murray State’s most difficult tests of the season were in a loss to Middle Tennessee State on November 13 and a loss to auburn on December 19. Outside of these two games the Racers faced a very easy schedule.

Like West Virginia, Murray State has a senior duo they rely heavily on. Guard Jonathan Stark averaged 21.8 points and 3.29 assists this season. Forward Terrell Miller went for 14.7 points per game and 8.3 rebounds.

Murray State was the first team to punch their ticket to the Big Dance.

We've got our first ticket punched!

Murray State is going to the NCAA Tournament for the 16th time in school history. pic.twitter.com/UbXiLkrWNB

West Virginia will be led by All-Big 12 guard Jevon Carter and his backcourt mate Daxter Miles Jr. After losing to Kansas 81-70 in the final of the Big 12 Tournament, these two will be relied upon heavily for West Virginia to get back on track.

The winner of this game will move on to face the winner of No. 4-seed Wichita State and No. 13-seed Marshall. Imagine a Friends of Coal Bowl with a Sweet 16 berth at stake. Wichita State will be heavily favored and of course the Mountaineers need to take care of business for a chance at that happening.