West Virginia Has Been Absolutely Dominant in Spain 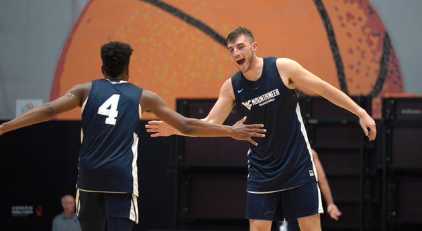 During West Virginia basketball’s dismantling of “professional” teams in Spain, there have been several positives and a few negatives that have come from their trip.

We’ll start with the bad.  The opponents have been…to be nice, underwhelming and to be accurate, downright awful.  Many of the players look like typical old dudes from a local YMCA and although experienced, lack the size and athleticism that would make them a challenge for the Mountaineers.  If Bob Huggins is attempting to prepare his team for future Big 12 and out of conference opponents, it will not happen during this trip.

In addition to lacking size and athleticism, the teams from Spain do not appear to be cohesive at all.  Rather, it looks like five guys were thrown on the court without any real organization.  While it was expected that the players would be undersized and less athletic than competition they will face in the Big 12, Huggins undoubtedly expected the players to at least be intelligent players that could shoot.  Unfortunately, they don’t appear to be that either.

Derek Culver, Emmitt Matthews, Jr., Jermaine Haley and even Logan Routt have looked impressive, but it’s difficult to judge their performance because they outsize their opponents by several inches.  The same could be said for newcomers Sean McNeil, Taz Sherman and Miles McBride, who have played really well, but the competition makes it impossible to determine how they’ll perform in the upcoming season based on how they’ve played against inferior competition.

Bob Huggins said it best following his team’s blowout 115-50 win over CC Basketball Academy in Valencia, Spain.  Discussing what he’d like to see in the final game, Huggins said, ““Hopefully it’s a closer game and we have to be able to run some things.”  He clearly wants to see how his players will do under adversity and against real competition.

With that said, sometimes it’s a good thing to beat up on teams.  After the miserable experience of last season, winning big reminds players just how talented they are and gives them a renewed sense of confidence.  In other words, it is very good for the morale of the team.  The camaraderie the players are building on this trip will last a lifetime.

The experience of traveling together in a foreign country has been invaluable for veterans and new players on the team as they continue to gel both on and off the court.  Huggins said, “This has been a great experience for the veterans and for the new guys, but we still have a lot of work to do.”

Although his teams have dominated and have looked better than could have been expected during this trip, Bob Huggins and his players will continue to work and get better.

The Mountaineers travel to their final game in Spain to play the Barcelona All Stars in Barcelona.  The game will begin at 2PM eastern on Sunday and can viewed live on Flohoops.com.  The team will then spend the next few days in Spain before returning home back to Morgantown on Tuesday.