West Virginia Could Be First Team With Three 1,000 Yard Receivers Since 2013 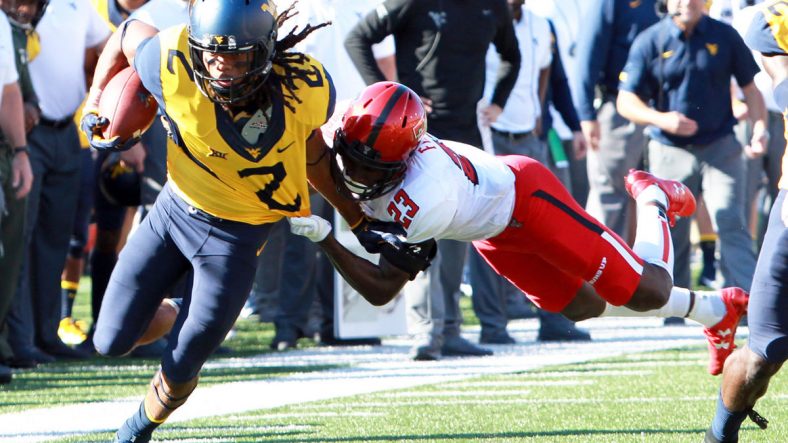 It’s been a great year for the vaunted Mountaineer passing attack. Perhaps historical. West Virginia could be the first team with three 1,000 yard receivers since the 2013 Fresno State Bulldogs.

Gary Jennings currently sits at 1,016 yards so his work is done as far as getting to the 1,000 yard mark.

Ka’Raun White could be the second Mountaineer to get to the 1,000 yard mark Saturday at Oklahoma. He sits at 970 yards currently. That could be taken care of in the first drive if White is able to shake loose.

Then you have David Sills V the touchdown maker. The Biletnikoff Award finalist. Sills is sitting at 903 yards on the season leaving him 97 yards short. Additional to that Sills has 18 touchdowns on the season.What does that say for your receiving core when your third-leading receiver is the finalist for the Biletnioff Award?

What makes this more challenging is the Mountaineers will be without starting quarterback Will Grier. He required surgery on his right middle finger after injuring it while going for the pylon against the Texas Longhorns. He has not yet been ruled out for the bowl game. Chris Chugunov leads the Mountaineer passing attack into Norman, Oklahoma with hopes of putting up big numbers and outscoring the high-powered Sooners offense, led by Heisman hopeful Baker Mayfield. Mayfield will be sitting out at least the first series against the Mountaineers due to recent transgressions on the sideline against the Kansas Jayhawks.

The Mountaineers and Sooners are set to kickoff at 3:45 on Saturday and will be televised on ESPN.