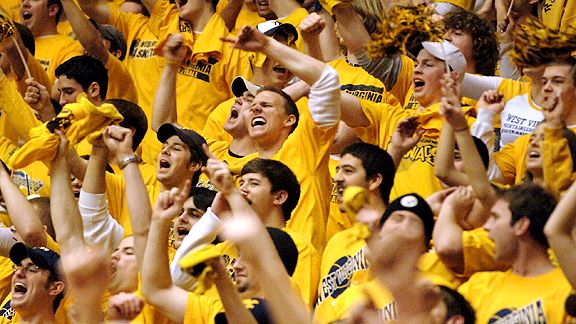 The Coliseum is known as a tough place to play. For instance, national power Kansas narrowly avoided a five-game losing streak in Morgantown. This website takes it in another direction. It rates West Virginia basketball fans as one of the most obnoxious crowds in college basketball.

According to an article by Matt Meltzer and Jeff Zanotti of Thrillist.com, West Virginia ranks No. 6 in the country among the most obnoxious fans in college basketball.

The story includes plenty of repeated and tired one-liners about West Virginia fans. A case could be made that Mountaineer fans are obnoxious, but this story does a poor job of doing so.

His go-to jokes are about inebriation and burning couches. Sure, couches have been burned in Morgantown, but nowhere near the rate this article suggests. We don’t burn couches after every win.

Here is the clip about West Virginia fans:

Some stereotypes about West Virginia are a little unfounded. Yes, they have the internet. No, they’re not all married to their cousins. You know what stereotype isn’t even a little untrue? The couch burning. Win or lose, West Virginia fans feel the appropriate response to the end of a sports match is to torch a perfectly good couch. You have one of the best basketball coaches in history and a team that wins all the time. Why are you so angry, Mountaineers fans? Oh right. Because you’re shitfaced. Not “I might not get out of here alive” shitfaced like the fans at UTEP. “Multiple PA warnings about throwing objects onto the court” shitfaced. WVA might not have the most obnoxious fans in college basketball, but if you’re not on their level of inebriation, it sure does feel like it.

Not funny, nothing original, not much substance to it. About what you’d expect. It’s basically written to irritate people and talk about it. Like I am doing right now.

On a more positive note, they did rank No. 1. As an attendee of the 2004 Gator Bowl that West Virginia lost to Maryland by a final score of 41-7, I can say I wholeheartedly agree.

Put simply, there is not a meaner, more tasteless, ruthless, unscrupulous fan base in the NCAA than the University of Maryland Terrapins. If attending a home game in opposing colors, prepare to face a shower of profanity and bodily fluids. Dare to stick around after a game and there’s a better-than-there-should-be chance you’ll be privy to a riot. Terps fans are an unreasonably nasty and biting collection of people drawn from the same geographic region as Eagles fans who feel it’s their sworn duty to act like complete assholes at any sporting event. All this for a whopping one national title to show for it. Who can forget how head coach Gary Williams threw shade at Jim Calhoun and his recruiting methods after Rudy Gay chose UConn over Maryland? Don’t get us wrong, there are years when this team has been up there with the best in the nation. There’s just never been one where the fans weren’t flat out the worst.

That was a little more satisfying to read.

If you want to read about a positive exchange when outsiders dealt with Morgantown, check out this story on a Big 12 fan’s first trip to “Almost Heaven.” Granted, it was for a football game, but still it’s a good read.