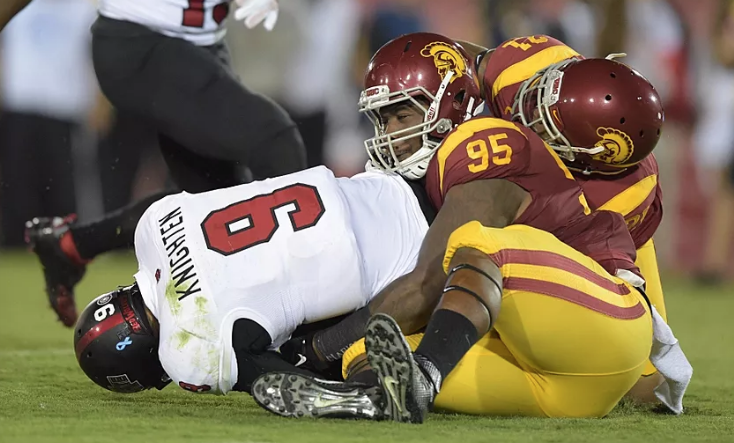 With the attrition on the defensive line, the Mountaineers were in desperate need in that area. They’ve addressed it. West Virginia adds former USC defensive tackle Kenny Bigelow. The former Trojan made the announcement on Twitter. that he will join the Mountaineers as a graduate transfer this season.

Two separate ACL tears caused him to miss the 2014 and 2016 seasons. Because of this he was granted a sixth season of eligibility. He played as a reserve during the 2015 season and was on the field for 13 games. He played some for  first half of the 2017 season before he decided to retire from football. He moved into a role on the USC staff and helped to mentor some of the younger players on the Trojan roster. In November he applied for his sixth year of eligibility and announced he was going to continue playing football at a different school.

Bigelow attended Eastern Christian Academy. While there he teamed up with former Mountaineers Wendell Smallwood and Daikel Shorts. He was rated a five-star prospect in the 2013 recruiting class and was the No. 1 defensive tackle in the entire class. LSU Tigers head coach Ed Orgeron recruited him to play at Southern Cal. Bigelow is the highest rated recruit to ever sign with West Virginia.

After the loss of Lamonte McDougle, West Virginia was in dire straights on the defensive line, so adding some depth was a must.

Congrats to Kenny Bigelow and good luck as a Mountaineer!