Welcome Back to the Heisman Race, Will Grier 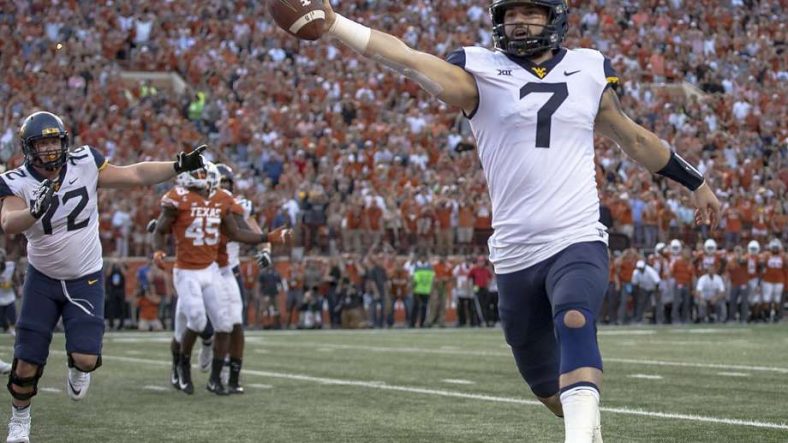 Hey, if ESPN says it, it’s gotta be true, right? The opening line of an ESPN article on Saturday night read, “Welcome back to the Heisman conversation, Will Grier.”

With the Mountaineers running out of time, Grier floated a beautiful touchdown pass over a couple of Texas defenders and into the hands of Gary Jennings Jr., who did a heck of a job getting his foot down and hauling it in in the back of the end zone.

This throw might lock up Will Grier's ticket to the Heisman ceremony ?? pic.twitter.com/omgwH9613T

The 33-yard touchdown pass pulled WVU within a point with 16 seconds to go. Coach Dana Holgorsen’s mind was made up. His Mountaineers were going for the two-point conversion and the win.

Grier threw completed a pass for the two-point conversion to his favorite target, David Sills. Celebration ensued. Mountaineer high fives ensued everywhere. But the celebration was short lived. It turns out Texas’ coach called a timeout right before the play happened.

The Mountaineers were forced to run it back. This time Texas was all over Sills. Mountaineer offensive coordinator Jake Spavital knew this was going to happen and called the quarterback draw. With everyone covered, Grier took off for the pylon, much like on the play he was injured last year against the Longhorns. This time he made it into the end zone, giving WVU their biggest conference victory since joining the Big 12.

Will Grier for the win! pic.twitter.com/FUe5jWenNS

Grier was 28 of 42 for 346 yards and three touchdown passes. In the second half, the Longhorns dropped back into a defense with just three down lineman and allowed West Virginia to gash the Texas defense with running plays.

When it came down to the final drive, there was no choice but to air it out. Will Grier came through when his teammates needed him most.

Over the past few weeks it seems Tua Tagovailoa of Alabama and Kyler Murray of Oklahoma have separated themselves from the pack in the Heisman race. This outstanding performance by Grier could have him back in the hunt.

As for the Longhorns, they didn’t handle their L too well.