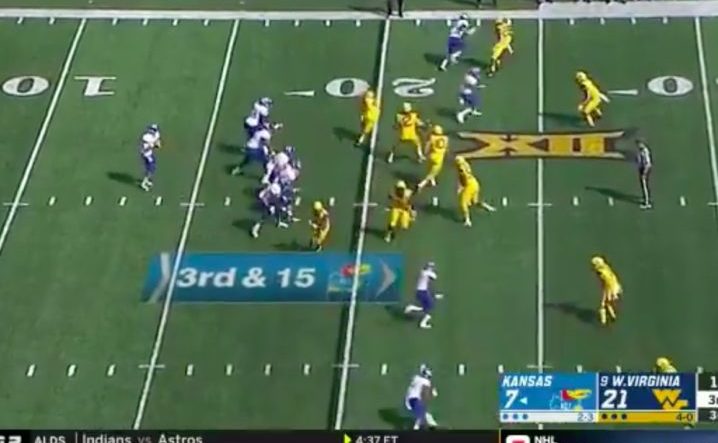 When coordinators make a crazy call like this it better work, because they are really putting themselves out on a limb. Unfortunately for West Virginia defensive coordinator Tony Gibson, dropping all 11 failed miserably and resulted in an appearance in ESPN’s famed “C’mon Man!”

The lowly Kansas Jayhawks were facing a third-and-15 in the third quarter on Saturday. That’s when Tony Gibson decided to try some serious thinking outside the box. The West Virginia defense dropped every single player back into coverage. That’s right, all 11 players dropped back into coverage with no one rushing the passer. And it failed miserably. Kansas still got the first down.

This is one instance where being a college team on an NFL show is definitely not a good thing.

Jeremiah Booker was able to shake loose despite 11 players in coverage and quarterback Peyton Bender ran right past everyone and caught a pass.

Kansas went on to score a touchdown on this drive. It put the huge underdog Jayhawks within a score of the Mountaineers.

I’d say it’s a pretty safe bet that Tony Gibson keeps that play in his back pocket for the rest of the year. If it didn’t work against Kansas, it probably won’t work against anyone left on the schedule.

Saturday Down South took a shot at the Mountaineers for their defensive play calling.

What the Mountaineers thought their defensive linemen were going to do bunched together five yards down the field on a third-and-15 play is beyond me, but they probably would have been better served trying to get some pass rush.

When you allow plays like this to the Jayhawks, of all teams, it’s a bad sign for what many think is a College Football Playoff contender.

Maybe the Mountaineers were just testing out some things before they hit the meat of their schedule in the coming months. West Virginia did not look like a College Football Playoff hopeful in a narrow win over Kansas. Regardless, Coach Holgorsen and the boys got the win. As they say, “A win is a win.”

On to Iowa State…