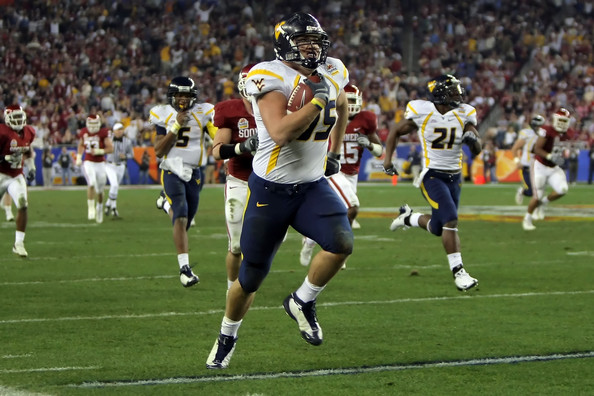 Has there ever been a more perfect man to represent WVU football than Owen Schmitt? In this video “The Runaway Beer Truck” provides some narration that pulls at your heartstrings.

Owen Schmitt began his college career as a walk-on. He sent tapes to nearly every school in the country, but chose to head to Morgantown to see if he could get more time on the football field.

Rich Rodriguez saw something in him. Luckily for Schmitt, as well as every single Mountaineer fan, it worked out and he had an incredible collegiate career as a Mountaineer.

His hard work and determination paid off. By 2007 the former walk-on was in the same backfield as Pat White and Steve Slaton.

In the video Schmitt says Morgantown is “where passion, pride and tradition meet.”

Owen Schmitt contributed to all of these things while he was a Mountaineer. To this day he continues to be a Morgantown resident. He is a business owner. In 2013 he opened Schmitt’s Saloon. A must see for any Mountaineer fan.

If you are a Mountaineer, hearing Owen Schmitt says this undoubtedly fired you up:

“The countdown to kickoff has begun. Carrying memories of legends who never stopped fighting. who carried the pride of an entire state on their shoulders. This is the mountaineer mentality. It’s in our blood, our sweat, our nature.”

This is who we are. This is what we stand for. This is West Virginia football. Narrated by Owen Schmitt. pic.twitter.com/Tfha20pme1

Mountaineer Nation is fired up for Sunday and ready to see WVU take back the Black Diamond Trophy. Let’s go Mountaineers!