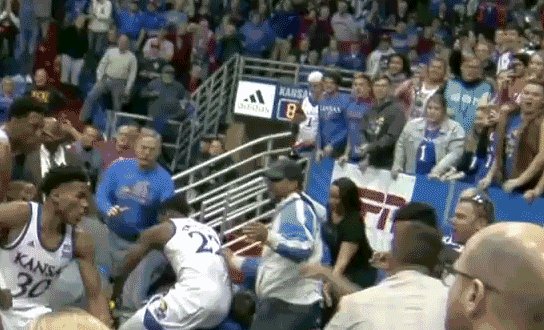 At the end of the Kansas-Kansas State game, a complete brawl broke out. When Jayhawks big man Silvio De Souza taunted Wildcats guard DaJuan Gordon after a blocked shot is when things popped off.

Some Kansas State players shoved De Souza to retaliate and from there a massive fight was underway with plays from both teams as well as non-players throwing and landing punches at “The Phog.”

Fans, team officials and even arena employees were swept into the insanity. You can see De Souza throwing hands with a member of Kansas State who was wearing a black polo.

Things reached peak insanity when De Souza channelled his inner Hulk Hogan and picked up a folding chair with intentions of going for a chair shot.

we almost had a chairshot pic.twitter.com/nY7fviM9zf

What an embarrassing moment for these two basketball teams.